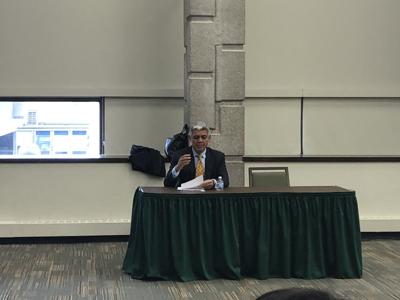 “If we can’t fit it in our budget, I will take it out of my little pockets with the money I have for these initiatives,” Wilson said.

Senator at Large Bilal Hammoud was the original Senate member who presented the Open Educational Resource resolution on Nov. 15, 2018. He was excited to hear Wilson’s response.

“In this new era of education, we need to combat and prevent the abuse of students and faculty,” he said. “When students education is put at risk because of the financial burden of textbooks, it is up to the institution to provide an affordable alternative.”

Hammoud also said these open resources will provide a financial incentive to faculty members who develop their own educational resources. Thus, positively impacting both students and professors.

Along with a visit from President Wilson, the body passed a resolution regarding gender-exclusive restrooms on campus.

This resolution supports the repeal of a particular Board of Governors code statute and calls for a change in its language.

According to the resolution, “The current statute deems it unlawful for any person to use a public restroom on campus unless that person is of the ‘sex’ designated for admittance therein.”

The Senate’s amendment proposes to change the word ‘sex’ with gender identity. The code was repealed by the BOG on June 24, 2016. However, the resolution states the code was never updated online to reflect this repeal. The Senate said this resolution is aimed to promote inclusion for WSU’s transgender or gender-nonconforming community.

In addition to the passed resolution, Student Senate also created Suicide Prevention Week. This event is co-sponsored with the Counseling and Psychological Services and will take place April 8 through 12. Throughout the week, Senate and CAPS will promote mental health awareness with suicide prevention workshops.

Students who come to the workshops can become certified in suicide prevention, which is valid for three years, according to the Event Sponsorship Proposal. CAPS will be hosting a certification seminar that is one hour long on Friday, April 12.

On Jan. 16, 2018, every student, faculty and staff member were emailed a link to the Campus Climate Survey. During the meeting, Associate Dean for the Department of Communications Loraleigh Keashly and Associate Provost for Diversity and Inclusion Marquita Chamblee presented the results of the survey. A total of 5,521 students, staff and faculty participated in the study overall.

According to Keashly, the results indicate the ever-more need to pay attention to diversity on campus.

Chamblee announced the university will be conducting a similar survey every four years in order to measure changes in WSU’s campus environment.

The next Student Senate meeting is April 18 in room 10 of the Student Center.