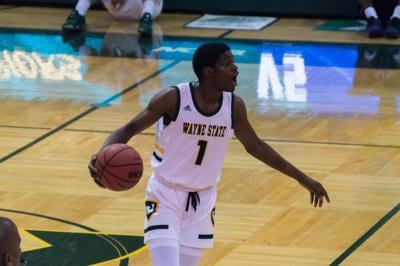 The Bulldogs wasted little time seizing momentum to open the contest, scoring the first five points of the game, and jumped out to a 22-9 lead.

FSU increased its advantage throughout the half, leading 46-25 late in the stanza, before WSU scored the final eight points of the period, punctuated by a triple by graduate forward James Gordon IV late in the quarter to cut its deficit to 48-36 at the intermission.

WSU made its final comeback attempt early in the second half, cutting Ferris State’s lead to 55-47, before the Bulldogs used a 15-4 run to take a 71-51 lead and effectively seal the win.

Head coach, David Greer, said not seeing shots fall on offense in the second half hindered the team’s comeback.

“Sometimes you got teams that predicate the whole game on offense and when the offense struggles, they forget about the defensive part, and I thought we did that,” Greer said.

“I thought Ferris did a great job on Brailen Neely today,” Greer said. “I thought they bottled him up and I thought he got frustrated out there (and) they made him play defense.”

The same day, Wayne State women’s basketball suffered an 86-85 loss to Ferris State University in overtime at the Matthaei.

After trailing for most of the game, WSU scored the first five points of the fourth period to take a 61-59 lead. Following two Bulldogs free throws, freshman center Mercedes Wagner scored the next five points to give the Warriors a 66-61 lead.

WSU led 73-69 with more than a minute left in regulation before FSU scored on consecutive possessions to tie the game at 73 with 43 seconds left.

Heading into WSU’s next possession, head coach Carrie Lohr said the team looked to take time off the clock and look for the best shot.

“Out of that timeout it was clearly (our goal) to run the clock down, use our last-second shot and look to attack the basket,” Lohr said. “Obviously, we were looking to get a shot off, but it didn’t happen.”

WSU had an opportunity to win the game in regulation, but the Bulldogs forced a shot-clock violation and missed a jumper as time expired to send the game into overtime.

In the extra period, both teams traded points for most of the stanza, before free throws from sophomore forward Sam Cherney and a layup by senior guard Alex Matus pushed WSU ahead 84-80 with 1:05 remaining.

As they did late in the final quarter, the Bulldogs responded by scoring the next four points to tie the game with 10 seconds remaining.

On WSU’s next possession, senior guard Sadia Johnson drew a foul and made a free throw to give WSU an 85-84 lead with five seconds left in the game.

Ferris State missed two close shots before securing an offensive rebound and hit the winning shot as time expired to win the game.

In preparation for the team’s two-game road trip versus Grand Valley State University and Davenport University, Lohr said the team will look to cut down on mistakes.

“We’ve got to minimize our mental errors and we’ll go back and watch film, and talk it through with the team, and see where we can do a better job as coaches to help them,” Lohr said.

Both teams return to the Matthaei to face Purdue University Northwest Feb. 13.