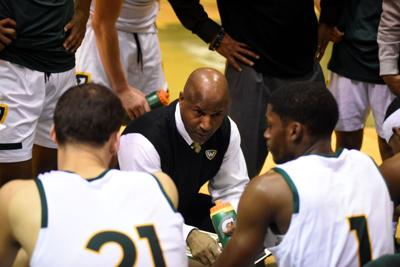 The Great Lakes Intercollegiate Athletic Conference cancelled all sports competition in 2020 due to COVID-19, but student-athlete Jackson Harris is hopeful play will resume next year.

Harris started his college basketball career playing at Oakland University before deciding to come to WSU. However, men’s basketball coach David Greer said Harris has been on his radar since high school.

"Jackson was a guy we actually looked at while he was in high school, but he originally decided to go Division I," Greer said.

Despite being a standout player in high school, Harris is focused on finding his role within WSU’s roster this year, he said.

"My only goal right now for the time being is to keep improving and working hard and then I also want to keep getting comfortable with the team and the program," Harris said.

Harris wants to continue to develop his game, he said.

"I just felt like it (OU) wasn't really the best place for me to continue to improve my game and get better, so at the end of the year I made the decision that I needed to explore other options and find a different place to play," Harris said.

Harris narrowed down his transfer options to Saginaw Valley State University and WSU. Ultimately, he chose the school that made him feel at home, he said.

"With the coaching staff and our playing style it reminded me a lot of my high school so that is why I made the decision, it just felt like the right fit," Harris said.

In recent years, the basketball program has found a lot of success through the transfer portal.

This season, Ryan Webb from Saginaw Valley State University and Kenny Pittman Jr. from OU will also join the men’s basketball team. Brailen Neely, a returning senior guard, transferred from OU two years ago and said he is satisfied with the move.

"The move to Wayne State has been one heck of an experience,” Neely said. “I've met new people that I enjoy coming to interact with every day and I've enjoyed this time with my new teammates. I couldn't be happier about the move.”

Although still adjusting to WSU, Harris has a positive mindset about making an impact with the team, he said.

"Right now, I am not entirely sure what my role will be, but I pretty much expect my role to be to make an impact in whatever way the coaches put me in position too and what I put myself in position to do," Harris said.

"Get better every day in practice, get better individually to keep getting better as a team, keep getting ready for a season and also work to get the opportunity to compete for a championship," he said.

Harris is looking for success with his new team, he said.

"I expect us to win, I just want to win games. That is my expectation and I think we are all familiar with the program and what is being expected of us,” he said. “I also just think that as an experienced team, our goal as a whole should be to win and hopefully push for a league championship.”

Greer wants his team to cherish every moment of the upcoming season, he said.

"I want the team to have an enjoyable season and I'm hoping this season can be one that the team is proud of," Greer said.

Victor Jackson is a contributing writer for The South End. He can be reached at vjack1317@wayne.edu.