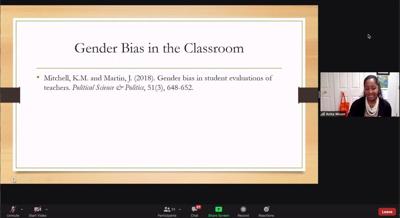 March 1987 marked the first Women’s History Month —34 years later, women have advanced in various fields. The celebration of women is still going strong despite the COVID-19 pandemic, even at Wayne State.

The Office of Multicultural Student Engagement put together a zine featuring short biographies of feminist icons, the history of the Gender, Sexuality and Women's Studies Program at WSU, a list of female-led campus organizations and a list to some campus events that were planned for Women's History Month.

Putting a damper on many social events, COVID-19 has limited ways WSU can honor women during this month, said Deanna Leila, president of WSU’s Make HERstory. The student organization started in June 2020, when COVID-19 was spreading quickly, preventing the group from ever having any face-to-face interaction since it formed.

Make HERstory is a female-led group that aims to “empower and inspire women” according to its Instagram.

“We had a lot of events that were meant to be in person, and bringing the community of girls and women together, I think we struggled with that because it was all on Zoom,” Leila said.

The lack of social interaction, however, did not prevent Make HERstory from celebrating Women’s History Month. The group has held a series of virtual events in celebration of the month, including a game night, a listening party and a virtual chat with high school girls, Leila said.

Make HERstory partnered with Lean In at WSU for Tea With Her on March 26. The groups had a “big sister talk” with girls from a local high school, in an effort to better community outreach, Leila said.

The Career Development Committee of the President’s Commission on the Status of Women held “Gender Disparity and the Advanced Degree: Knowing and Advocating for Your Value” on March 19.

The event was hosted by Anita Mixon, an assistant professor in the Department of Communication and expert in gender and women’s studies, race, rhetoric and rhetorical criticism. She discussed studies and literary works that looked into the struggles of women in the areas of being called by their proper titles, gender bias and self-advocacy.

The event also covered what women could do to ensure they are equally included in society professionally.

“One of the things that we have to really think about is challenging what our internal or inner thoughts are,” Mixon said. “Every person is entitled to get ahead, and you must recognize that the people in the room or those who are sitting next to you are not more deserving than you. And sometimes, our biggest obstacle is reminding ourselves of that.”

Wayne Women in Business, an organization focused on helping women advance in the field of business, was also hard at work, said Sally Bdeir, president of WWIB.

The organization did vision boards, recruited new members, and most recently, spoke with women in high business positions, Bdeir said.

WWIB spoke with Susan Telang, WSU alumna and CFO of Carhartt, Inc. on Tuesday to discuss her career successes and roadblocks, Bdeir said. Telang was the highlight of the month, sharing her journey as a woman in leadership and difficulties she has gone through.

“(Women in leadership) is a really important topic that we strive to focus on,” Bdeir said. “We've had a lot of great events.”

Although March is coming to an end, women are doing great things year-round. The celebration of women’s accomplishments should not stop just because the month is over, Leila said.

“To me, I feel like Women's History Month should be every month,” Leila said. “I feel like as a society, even though we've made progression in women's history, it's not enough.”