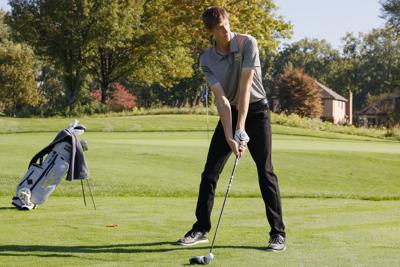 This month, the Wayne State men’s golf team finished its season on Oct. 11 — a successful one at that. Now entering a five-month off-season, the team is gearing up for the spring.

The Warriors finished in the top five in all but one of their 10 tournaments this fall, and had multiple top three performances. They also placed first at the Kyle Ryman Memorial Invitational on Oct. 4 and 5.

Redshirt senior captain Sean Niles said that based on WSU’s fall performance, the team feels confident as they look forward to the offseason.

“We definitely finished the fall season well, and I think going into the off season, it was a good boost to have a few good performances,” Niles said.

Head coach Mike Horn said he was pleased with how his team performed this season.

“I knew we’d have a little bit of struggle to start and we kind of just got better every single time we played,” Horn said. “I was very happy with the fall.”

After finishing tied for fourth on day one and second on day two in its final tournament, the team shares a consensus that WSU will also have a strong start in the spring.

Redshirt sophomore Garret Day said he believes WSU is ready to compete against some of the country’s best teams when the new season starts.

Niles said he agreed with Dayand with the work they plan to put into the off-season, Niles believes the team will have a competitive edge.

“I like how the group is starting to mesh together quite a bit and I think that’s going to continue to happen throughout the winter,” Niles said. “I know I’m playing in a lot of events this winter and I think a few of the other guys in the lineup are as well, so that will only help us build more into the spring and, instead of having the lull we did getting into college golf in the fall, I think we’ll kind of come out guns blazing early.”

Horn said the home tournament was WSU’s strongest performance of the fall season, with the team shooting 9 under par.

“The last event where we hosted at the Motor City, we beat three, four, five really good teams,” Horn said. “They’re all in the top 25 to 30 in the country, so that’s really a big deal for us.”

Horn said he saw a couple of standout players this season, including junior Josh DiCarlo and freshman Max Leppelmeier.

“Josh DiCarlo was fantastic. Max Leppelmeier, a freshman who hasn’t even started yet, every round he played he played well,” Horn said.

Day said Leppelmeier will be good for the team going forward.

Horn and the rest of the team have high expectations for the spring, Niles said.

Horn said he is proud of how hard his team is working in the off-season.

“Our season is over, but they’re practicing on their own a number of days a week,” Horn said. “I’ll go to the golf course to do some other business and there they will be — practicing. All on their own. It’s really cool to see.”

Niles said he sees the team doing well in its spring season and he wants to go make a run at the NCAA Championships, which will be held May 16-19 at the TPC Michigan Golf Course in Dearborn.

“We’ve got our sights set on the national championship run frankly. I don’t think we’re in a position where we’re too far off to say that,” Niles said. “I realize that’s setting our expectations high, but I think the baseline is that we’re going to consistently put in work and consistently get better, and the results should take care of themselves then.”

Katherine Stozicki is a contributing writer for The South End. She can be reached at hg8319@wayne.edu.