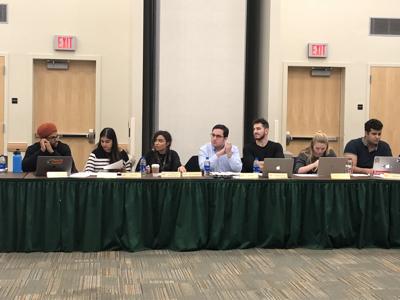 Due to the cockroach infestation, University Towers conducted room inspections to ensure each unit was abiding by code and university standards. However, 118 out of 300 units failed the inspection, Brown said.

“The problem of roaches seems to persist from upper-level units, where students stay year-round, mixed with low sanitization of kitchens and clutter,” said Brown.

As a result of the cockroach issue, Housing and Residential Life created a new policy and disciplinary system. After this week, University Towers will start having weekly inspections to ensure each room is up to hygienic code.

Students will be evicted from their unit and forced to pay an eviction fee if their room is not up to university standards after being put on probation, according to the new policy.

The Campus Safety Advisory Council will host quarterly meetings, providing students and faculty a chance to discuss their concerns directly with campus police in a town hall setting.

“By state code and law this type committee has to exist, and this law was passed in the 1970s,” said Baum. “I was under the impression that this safety committee did exist at some point. However, it actually never existed in the first place, so we are now finally complying with law.”

The Senate discussed the current situation regarding establishment of an on-campus polling location.

“It looks very promising that we will get a polling location started on campus within the semester,” said Baum. “If there is no local election in 2019 then the first election that this polling location will be used is the March presidential primary elections, which is very exciting.”

“I’ve seen a number of advances, challenges, weaknesses and strengths regarding our sustainability program,” said Pierson. “I have heard about all of the statements and conspiracies regarding our recycling program.”

“Recycling is a challenge and it is up to us, the users of the campus, to initially recycle. Then it is up to the custodians to get the recycling bins to the recycling dumpsters,” he said. “If that process happens as it should, then we recycle all day, every day.”

Pierson said he will be meeting with the head of custodial services and a representative from Corvias, WSU’s housing partner, to discuss how to better WSU’s recycling program.

Student Senate's next meeting is on Feb. 7 at 6 p.m. in the Student Center's Hilberry A/B.

Editor's note: A source provided The South End an incorrect date and location of Student Senate's next meeting, which was published in an earlier version of this article.

Cover photo is from the Jan. 17 Student Senate meeting and is by Slone Terranella.