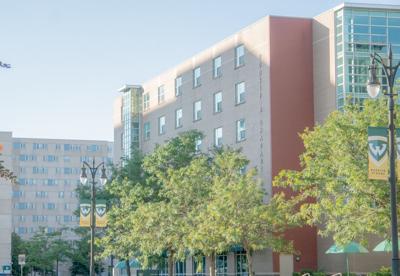 The display depicted windmills as swastikas and read “Green energy: More effective than Auschwitz,” according to The South End. It was set up on Anthony Wayne Drive, near Yousif B. Ghafari Hall.

The LaRouche Organization, who put up the display, aims to spread the values of controversial political activist Lyndon LaRouche, according to its website.

“TLO will emphatically promote the idea to which LaRouche devoted his entire life, namely that the U.S., together with other industrial nations, will act to overcome the underdevelopment and poverty of the so-called developing sector with the aid of advanced technologies,” the website stated.

A federal jury found LaRouche guilty of fraud conspiracy in 1988 according to The New York Times.

TLO also came under fire in 2012 when some followers of LaRouche’s work compared President Barack Obama to Adolf Hitler, according to The Washington Post.

Dean of Students David Strauss addressed the incident in an email to the campus community Thursday.

“Yesterday, an outside organization set up a display on our campus that was in no way consistent with the spirit, pride and values of Wayne State University,” Strauss said. “This organization’s display of antisemitic signage, which was set up without permission, referenced the Holocaust and was vulgar and reprehensible.”

WSU Chief of Police Anthony Holt said he learned of the display through a phone call from a patrol officer Wednesday morning. He could not confirm the name of the patrol officer who notified him.

“The patrol officer called in and said ‘there’s a group setting up tables on Anthony Wayne Drive and Merrick (Street). Do we know if they have a permit or if they’re allowed to do so?’” Holt said. “We sent a supervisor to the scene and then I got there. We had a conversation with them, and took it from there.”

TLO left campus after a conversation with Holt and other officers, he said.

The organization is not affiliated with WSU and did not have permission to be on campus, Strauss said in an interview with TSE Thursday.

Strauss also addressed the incident at a Student Senate meeting Thursday. In an interview after the meeting, Senate President Sailor Mayes said she wanted Jewish students and faculty to know that WSU would protect them.

“I am truly very sorry and Wayne State’s taking the right steps to making this better,” Mayes said. “Dean Strauss included a(n) email to all students and we’re looking forward to making sure that these people will never be able to do this on campus again because I think it’s unacceptable.”

The incident occured on the eve of the Jewish holiday Yom Kippur. The holiday marks the holiest day of the year in Judaism and is observed by fasting, praying and more, according to Chabad.org.

Strauss said the display was shameful, regardless of political or religious differences.

“I think it offends all people who believe in civility, respect and humanity,” he said. “It doesn’t matter what their beliefs or followings are, if they believe in humanity like I do, then they should be as offended as I am.”

Holt said he received multiple complaints about the display on Wednesday and Thursday.

“We got numerous calls from students. I even got some calls from out of state about it,” Holt said. “When it crosses the line and we know it’s a disturbance, we work to disperse them. Even though you might not see an officer in uniform, rest assured, an officer was there the entire time.”

Miriam Starkman, Hillel of Metro Detroit executive director, said she condemned the display and wanted to avoid giving exposure to the organization, including by naming them.

“The people (the organization) using graphic language and pictorial representation are doing it in order to elicit a response,” Starkman said.

Strauss said he would like to look at this as an opportunity to show the strength of WSU.

“We are a spirited and proud community, and we need to recognize, cherish and hold it above all,” Strauss said. “We need to use this as a rallying point and say that this doesn’t fly on our campus. You’re not going to take us down with this. We as Wayne State are better than this.”

The LaRouche Organization could not be reached for comment at the time of publication.

This is an evolving story and will be updated with additional reporting.