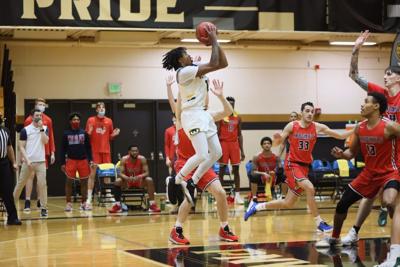 On March 4, No. 1 seed Wayne State University men's basketball team was upset by the No. 8 seed Saginaw Valley State University 76-74 in the opening round of the Great Lakes Intercollegiate Athletic Conference Men's Basketball Tournament at the John Friend Court.

Before this game, WSU had already beaten SVSU twice in their Feb. 19 and Feb. 20 regular-season series. WSU dominated both games in the series, winning by a margin of at least 15 points each time.

Despite that, Head Coach David Greer said his team didn't look at themselves as the favorite heading into the first-round game.

"I don't think we had any expectations. Every time we take the floor, it's a different situation. I thought all the teams were evenly matched. I thought a lot of other teams, like Michigan Tech or Grand Valley, could have easily been the first seed, we just needed to play our best game," Greer said.

The game could not have started worse for WSU. In the opening three minutes of the first half, SVSU took a 9-0 lead. WSU then proceeded to call a timeout, leading to a three-pointer from senior guard Brailen Neely.

Junior guard Antonio Marshall received his second foul with 14:31 left in the half. At that time, WSU was trailing 16-4 and Greer pulled Marshall for sophomore forward Kylin Grant.

"Getting off to a slow start definitely didn't help us. I mean, it was the same old song, Antonio got two fouls in the first five minutes and that forced him to sit pretty much the entire half, and that just hurts us a lot on the floor," Greer said.

Following a successful jumper from SVSU at the 10:22 mark of the first half, SVSU took a commanding 20-8 lead.

Greer said because of SVSU's defense, WSU needed to find different options throughout the game.

"Darian [Owens-White] turned the ball over four times in the first half. Then, they made an effort to surround Avery Lewis all game. We tried some different things, but we just needed some guys to step up, and it didn't happen," Greer said.

Following another successful jumper from Neely, WSU began fighting its way back into the game with 4:00 left in the half. WSU moved its focus to the paint and finding ways to use its agility to score. It paid off as SVSU's lead was cut down to 27-25 with 2:41 left in the half.

The final two minutes of the half heavily favored SVSU, shutting down WSU's offense and even hitting a buzzer-beater heading into halftime. At the half, the score was 36-28.

The second half was much like the first, WSU would fight back and trim the lead down, but SVSU would always proceed to go on a run to take another lead. SVSU had an upset and revenge on its mind while WSU was trying to keep the game alive. With that, the game became less friendly as both teams fought to keep what they had.

Greer said he was disappointed with how WSU handled emotions during the game.

"I don't think there's any question that we were frustrated. Brailen shouldn't have responded like that. That's not what we teach in practice. Darian just said that enough was enough, but he still got a tech. I don't think Darian warranted a technical but that's just the way it is," Greer said.

With one minute left in the game, WSU once again fought its way back into a position where it could steal the win from SVSU. Following a three-pointer from Owens-White, a layup from Marshall and some good defensive stops, WSU was only down 71-70 with 29 seconds left.

WSU chose to intentionally foul SVSU in the closing moments of the game, hoping SVSU would miss at the free-throw line. SVSU only missed one free-throw out of the five in the final 29 seconds.

With nine seconds left, WSU had one last chance to win or tie the game. Down 76-74, with no timeouts, WSU had the last possession. Neely took the inbounds pass and drove it the length of the court before opting to pass the ball. SVSU disrupted Neely's pass attempt, resulting in one final turnover for WSU.

Greer said he was let down at the opportunity to win the GLIAC championship passing them by.

"We had a chance to control our own destiny. Now it's out of our hands and we just have to hope for the best," Greer said.

SVSU will move onto the semifinals of the GLIAC Men's Basketball Tournament. Meanwhile, WSU hopes its regular-season performance will be enough to earn them a spot in the NCAA Tournament Midwest Regional.

On March 3, the GLIAC released their rankings and WSU was second in the Midwest Regional Rankings. WSU can no longer get the automatic GLIAC qualification into the tournament, but may still receive an at-large bid.

WSU will be watching the NCAA selection show at 10:30 p.m. on Sunday.

if someone loses the match it doesn't mean he got defeated all the time instead of that he is going to destroy the opponent next time. https://sambhalfamouskabab.online/

It's a learning process behind every failure, a lesson is waiting for us, we should focus on that.

Behind each and every failure there is a lesson for us to boost our performance.

To be the best, you must be able to handle the worst[thumbup]candere</>