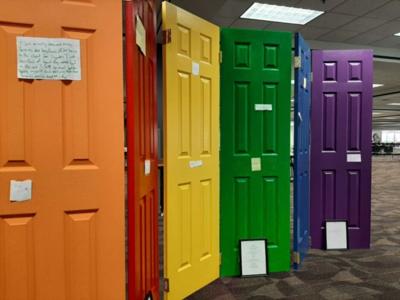 Anonymous coming out boxes were placed in the Undergraduate Library, Purdy-Kresge Library and Student Center from Oct. 11-15. Rainbow-colored doors were set up in the UGL on Oct. 20, to which anonymous coming out notes could be attached.

The rainbow doors were reused from a fall 2019 display organized by OMSE and Queer Trans People of Color, said Kristin Johnston, OMSE advisor for student engagement and academic advisor.

“Having things be anonymous is the best way to find out what people really think,” Johnston said. “Although this is a college campus, and a place for people who want to be free thinking, it’s still humans and no one likes to step out on their own. The boxes are an opportunity that is very specific and unique and offers anonymity of what you really think, and how you really feel without people directly connecting it to a person.”

‘Coming out’ refers to the revealing of one's gender identity or sexual orientation, which can be significant for LGBTQ individuals, according to The Trevor Project.

“For some people, coming out is an integral part of how they understand themselves, their family or community, their social or political outlook,” said Michael Schmidt, Gender, Sexuality, and Women’s Studies Program academic services officer and student engagement coordinator. “For those folks, celebrating Coming Out Week is a celebration of increased visibility for those diverse individuals, communities, and outlooks.”

J Allen, WSU School of Social Work assistant professor, said how one chooses to come out may look different for each individual and can change over time.

National Coming Out Day has been observed since 1988, according to the American Psychological Association.

“It’s nice to know that other people aren’t feeling as oppressed or hated here on campus,” Thomas said. “Be yourself with it. People will love you no matter what.”

Members of the LGBTQ community face a higher risk of experiencing poverty, stigma, and sexual assault, according to the Human Rights Campaign. Support for friends and family is the best way to combat these risks, Schmidt said.

“Coming out is rarely a singular event,” Schmidt said. “Oftentimes it is an ongoing negotiation and oftentimes coming out is literally fraught with danger.”

Schmidt said that whether and how one may choose to come out is a personal decision that others should respect.

“Nobody is required to come out, it’s not a requirement of anybody’s dignity or self worth. My advice in general is to support your friends, families, coworkers and colleagues, even random people in the streets,” Schmidt said. “Support them to the best that they need and the best that you know how and you’re capable of. Whether or not they want to have coming out as a part of that support is for them to decide, not for anybody else.”

The UGL rainbow-colored doors display runs until Nov. 3 and is open to all campus community members, Johnston said.

Cover photo of wall of doors with anonymous notes and displays of writings for Coming Out Week located on the second floor of the Undergraduate Library, Oct. 20. By Shawntay Lewis.