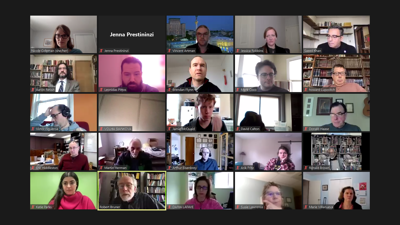 Russia invaded Ukraine Thursday and fighting has been ongoing across Ukraine since.

“The second one (reason) is the revolution in Ukraine… Putin argued in 2014 was illegitimate (and) fueled by western support, which supports proto-facism in Ukraine — a point harkening back to a touchstone for Putin of the second world war in which the Soviet Union fought it basically alone to fight the Nazis,” Retish said.

Retish said Putin’s other two reasons were his assertions that Russians were being persecuted by the Ukrainian Government and that Ukraine is not a valid independent country.

“Understand that Putin is not trying to recreate the Soviet Union. Putin is not Stalin. In fact, Putin is making an argument that its move is an anti-communist or really an anti-Leninist action to decommunize national autonomy mistakenly given by the Bolsheviks — that Ukrainians and Russians are one people,” he said. “This is more like lateimperial Russian nationalism.”

Alina Klin, associate professor of teaching in Polish, said Poland has shown its commitment to Ukraine by offering support to hundreds of thousands of refugees leaving Ukraine. The exact numbers of refugees has not been determined as the situation is ongoing.

“(W)hile previously it was not so easy for instance to get a permit to work for Ukrainian(s)... meaning that there was some red tape,” Klin said. “Now they want really to abolish all of this, to create a path for Ukrainians to become citizens of the EU (European Union), which is access to healthcare in Poland, access to education in Poland, so it’s all very important.”

The roundtable experienced an interruption when audience members used racial slurs and graphic images while Vincent Artman, adjunct professor at the Center for Peace and Conflict Studies, was speaking. The participants were removed, and the discussion resumed.

“(S)adly, not too unexpected,” Artman said. “That’s the kind of thing that we've come to expect, partly through the sorts of information warfare that has been playing out over the last several years.”

Artman said he currently has family in Ukraine. The idea that this invasion would have been prevented if NATO had reduced its reach in Eastern Europe or Ukraine remained neutral in European geopolitics is not accurate, he said.

“This is not about Russian security. Don’t forget that Russia already has borders with several NATO countries,” Artman said. “Don't forget there's the Kaliningrad enclave there that has quarters with numerous NATO countries. What this is about is not Soviet evangelism, as some people have said, but as Aaron (Retish) pointed out, this is really about, sort of, the restoration of some sort of Czarist era maximal Russian state.”

Retish said the ongoing invasion of Ukraine differs from Russia’s annexation of Crimea in 2014 because there wasn’t an influx of Russian propaganda before the current invasion began.

Artman said Russia invaded Ukraine under the premise of anti-fascism.

“I think that this war was intended to be its own propaganda in some sense it was intended to be a lightning-fast blitzkrieg to decapitate the Ukrainian Government under the guise of a special military operation in Donbas,” he said. “The Russian Government, as far as I know, has still not really openly admitted that it is carrying out attacks anywhere else in Ukraine except for Donbas.”

Artman said there has been biased coverage of the war and reports of people of color from Ukraine being refused entry to Poland.

“There’s again, a great deal, I think, of reflection that we need to do as Westerners about who we think is worthy of saving and who is not,” Artman said. “We don't need to think very far back to how the United States has treated Afghan refugees in the last six months to understand that refugees are people in need, no matter where they're coming from.”

European countries like Poland, Romania, Ireland and others welcoming Ukrainian refugees has prompted comparisons to how refugees from Middle Eastern countries have been denied sanctuary in Europe in recent years.

Artman said this discrepancy in treatment should not be used as justification to dismiss the crisis Ukraine is facing.

“(T)his doesn't have to be a game of choose your favorite empire,” he said. “We can oppose all of those things, and maybe we've been less forthcoming with our solidarity with Palestinians and others than we ought to have, and that's wrong. None of that excuses what's happening in Ukraine.”

Klin said Poland’s response to Ukrainian refugees is not comparable to its refusal to take in Middle Eastern and African refugees last year.

“I think that the situation is completely different because the situation in the fall (2021) to which you are referring to, with the refugees who were taken by authorities of Belarus and enticed to come to Belarus and from Belarus to Poland and they were lied to,” Klin said. “They were told it would be very easy to cross the border.”

Klin said it is important not to conflate the Polish Government’s actions with the desires of its citizens.

“I would think (the) majority of Polish people were appalled by that (the Polish government’s decision), and they really felt that it’s terrible and the government did what they could to not allow Polish people to help the refugees on the border,” Klin said.

Klin said Poland did not receive EU support in that situation.

Volha Siankova, visiting professor from Belarus, presented during the event but their audio quality was poor, so The South End is unable to accurately report on what was said.

Jessica Robbins, associate professor of anthropology, said this war will have a long-term, negative impact on civilians.

“This invasion is producing trauma that will transform people’s lives and social relations and the fabric of society at a generational scale,” she said. “The legacies of this violence are multi-generational. This means that no matter how quick the resolution of this war is, and I hope it is soon and results in (a) free Ukraine, the effects of it will be long-lasting. Equally long lasting should be our attention to this violence and to violence and oppression everywhere.”