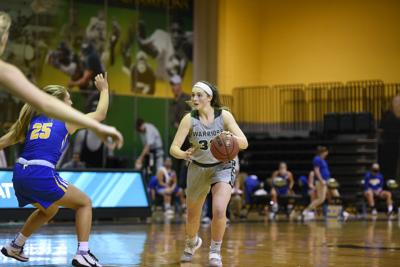 The Wayne State University women’s basketball team began their season undefeated following a pair of wins this week against Lake Superior State University at the WSU Matthaei Center. The first win was a 75-52 blowout on Jan. 11, and the second one was a 79-61 rout on Jan. 12.

Both games were a tale of two halves. In their respective first halves, it looked like LSSU was holding firm and capable of providing a tough matchup. By the end of both games, the box score would indicate that there was hardly a fight in the first place.

Head Coach Carrie Lohr, now entering her 10th season at the helm, said WSU’s dominant showing in the second halves is due to switching their defensive sets at halftime.

“We decided to go to a full-court press, and I believe that it changed the tempo for us and allowed us to dictate the game a little bit more. We were able to force some quick shots and that led to us rebounding and scoring. It was definitely a defensive change and mindset,” Lohr said.

Over the course of the two games, WSU out-rebounded LSSU by more than 50 rebounds. Even in the blocking department, WSU imposed their will, recording 11 blocks to LSSU’s two blocks. WSU also outscored LSSU in the paint by a margin of 90-30 points.

Lohr said she was surprised to see her team have such control in an area of the game they do not often see themselves dominate. She looks forward to the possibility of a strong inside game, if WSU can do so consistently.

“I’ll be honest with you, that has not been our forte the last couple of years. So to have that in our favor is something we can build on. So now, can we continue to do that? Can we continue to have counters ready on the perimeter when teams want to take away the inside game?” Lohr said.

Junior forward Sam Cherney, who turned into a rebounding machine at the tail end of last season, only played 19 minutes on Monday. She made all her time worth it, recording the first double-double of the season for WSU with 11 points off 5-11 shooting and ten rebounds. Even on the blocking end, she made her presence felt with three blocks.

It didn’t stop there. On Tuesday, Cherney led WSU with a career-high 22 points and tied yet another career-high of five blocks. She also nearly notched another double-double with nine rebounds.

Lohr said she was pleased to see how much Cherney’s abilities improved since she last played in March 2020—crediting Cherney’s performances this week to her conditioning during the COVID-19 pandemic.

“There is no question that Sam’s game has evolved and all of it is attributed to her hard work. Her and Grace [George] are two players who are in good condition, but you need more than two,” Lohr said.

Junior forward George was also unstoppable during the course of both games. On Monday, she played an efficient game, scoring 20 points off 7-13 shooting and grabbing seven rebounds.

On Tuesday, George played even better. That time around, scoring 21 points off 9-16 shooting and even notching 12 rebounds —securing her first double-double of the season in only the second game.

During the GLIAC’s suspension on athletics due to the pandemic, George never halted her training, Lohr said.

“She understands that nothing is given, it’s earned and she really lives by that. Throughout our shutdown, she’s the one calling and texting asking ‘What can I do for my workouts?’ Grace is someone who never stops and she didn’t let COVID stop her from doing her training,” Lohr said.

With two big wins under their belts and standout performances from George and Cherney, Lohr said she hopes to carry on the team’s success.

“We saw something in these last two days that we have envisioned out of these two [George and Cherney], and I’m really optimistic that it’s something that we can continue to build on. The more success they have, the more opportunity it will build for their teammates,” Lohr said.

WSU women’s basketball will travel to the Davenport University Student Center for a pair of matches against DU on Jan. 15 and Jan. 16.