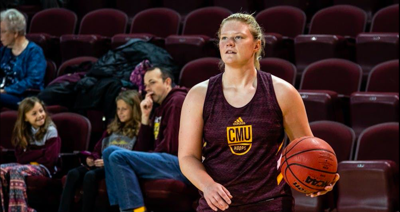 McArthur was a four-year letter winner and three-year team captain for the Warren Cousino High School Patriots, according to WSU Athletics. While in high school, McArthur scored over 1,500 points under the coaching of Mike Lee and Amy Mitchell.

McArthur initially wanted to go away for college, but later decided to transfer to WSU, she said. She appeared in eight games last season at CMU.

"I got the experience (being far from home), but I realized that Wayne State is the place to be all around for school and basketball," McArthur said.

Playing at WSU under Karen Lafata, Mitchell said she is familiar with the coaching style of WSU women’s basketball head coach Carrie Lohr.

“I think it’s (WSU basketball) a perfect fit for her,” Mitchell said.

Seeing McArthur play for the first time as a high schooler, Lohr thought, “Who is this little feisty freshman in the starting line up in a Class A school?” she said. What surprised her most about McArthur was her confidence.

"Most freshmen, when they step into a varsity game, they maybe don't have that confidence," Lohr said.

Due to the COVID-19 pandemic, winter sports have been pushed back. While this can be an opportunity to practice and prevent injuries, Lohr and her team are excited to get back to the game, she said.

One challenge McArthur faces is not many minutes playing, further hindered by the pandemic.

"She hasn't seen the court in terms of major minutes in the last years, and then you add a national pandemic that has not allowed her to be in the gym with her teammates," Lohr said.

McArthur said she believes her playstyle will mesh well with her new teammates.

"I've seen them play before. They move the ball, and they go fast, and that's my style: to get up and down and score some buckets,” she said. “I'm not afraid to dive on the floor and take a charge, I'm looking to hit the big three, and you know, just to get to the basket.”

Mitchell saw McArthur as a natural leader on the floor who considered her teammates’ successes with just as much pride as her own.

“She’s a piece of the game they’ve been looking for,” Mitchell said.

Players have also been unable to practice together, which has been challenging.

"They've been working out on their own, but you know, it's tough. They kind of measure themselves against one another," Lohr said.

Mitchell said she considers McArthur’s relationship with her teammates and coaches to be her biggest strength.

“It translates to chemistry on the floor. She gives one hundred percent all the time,” Mitchell said.

Lohr said she is optimistic about McArthur's addition to the team.

"What draws me to Kate is I've seen her in really tough moments in travel basketball, and she doesn't back down from a challenge,” she said. “In fact, I think sometimes the bigger the stage, the bigger she gets. And so those players are hard to find."

McArthur said she is committed to success as a member of the team.

"As far as playing time goes, you just earn it,” she said. “I'm not gonna go in and expect a certain spot. I'm gonna work hard for it. I think that if I work hard, I'll earn my playing time."

McArthur will elevate her teammates and give them more confidence, Lohr said.

"I've seen Kate have that 'it factor' on the court, and I'm excited to see how she brings it over to Warrior basketball," she said.