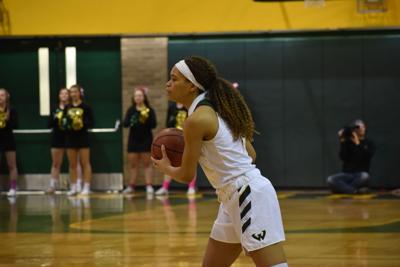 Wayne State’s men’s basketball team kept its postseason hopes alive with a down-to-the-wire 71–70 win, while the women’s team lost to Wisconsin-Parkside at the Matthaei on Feb.14.

Senior forward Jovan Henderson single-handedly paced WSU on offense early, scoring the team’s first ten points of the game. After the visitors pulled ahead 25–20 in the first half, WSU went on a 10–4 run to take a 30–29 lead.

Parkside scored six of the final eight points of the opening half, and a Rangers layup with one second remaining gave the visitors a 36–34 halftime lead.

The Rangers maintained their momentum after intermission, using an 8–0 run to extend their lead to 44–36 with 18:23 remaining in the game.

Parkside sustained their lead for most of the half, before a 6–0 run gave WSU a 62-61 lead with six minutes left in regulation.

After the Rangers reclaimed the lead, back-to-back dunks by Henderson gave WSU a 68–65 lead with 1:26 left. A triple by the visitors tied the game at 68 with 66 seconds left in regulation.

Both teams traded baskets in the final 20 seconds of the game before Davis Jr. was fouled with three seconds left. After making the first free throw, Davis Jr. intentionally missed the second attempt, and Parkside was unable to get a shot off, allowing WSU to secure the win.

After falling behind in blowout losses last weekend, head coach David Greer said keeping the game close early was a focus for the team.

“(Parkside) is an emotion team and they really make you expend a lot of energy on the defensive end,” Greer said. “Getting behind by a large margin would have been tough.”

“We’re probably not going to just blow anybody out, but we know we have to grind it out, so us getting that win should give us confidence that we can grind with anybody,” Henderson said.

After falling behind early, WSU used a 10–4 run, capped off by a three-pointer by junior guard Alex Matus to take a 14-9 lead. WSU held an 18-13 lead after one quarter.

Parkside maintained a double-digit lead for most of the third quarter, but WSU fought back hard, whittling away at the Rangers’ lead.

Junior guard Nastassja Chambers scored WSU’s first ten points of the fourth quarter to push the home team ahead 54–53 with 7:20 remaining in regulation.

Head coach Carrie Lohr said the Warriors put themselves in position to win the game, but their offensive execution in the final quarter hurt the team’s efforts.

“We’re usually a pretty good team in terms of taking care of the ball, we’re around the 11-turnover number (per game) and today we definitely exceeded that,” Lohr said. “In a close game you really need to value every possession and I thought we got sloppy with the ball.”

The men’s team improved its record to 6–15 (5–11 GLIAC) on the season and remain two games out of the final GLIAC Tournament spot with four games remaining.

The women Warriors are now 12–12 on the season (7–9 GLIAC) and are eighth seed in the GLIAC Tournament standings.

Both teams complete their home schedule at the Matthaei versus Purdue Northwest on Feb. 16.

Matt Williams is sports editor of The South End. He can be reached at mattmwilliams86@gmail.com. Cover and teaser photos by Lauren Bryne.