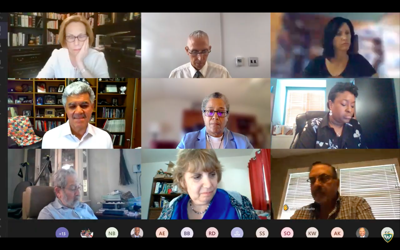 Wayne State Board of Governors voted to continue to suspend standardized test score requirements for incoming students through fall 2021 at its June 19 meeting held via Zoom.

The College Board and ACT noted that under-resourced districts and areas with high COVID-19 infections may face continued challenges in administering college admission tests, according to the request submitted by Provost Keith Whitfield. These circumstances may impact students’ access to higher education in Detroit.

The BOG originally voted to make standardized tests for fall 2020 optional in April.

Research is being conducted to see how students' success rate is connected to their standardized test score by the Office of Institutional Research and Analysis, Enrollment Management and Student Success in collaboration with Academic Senate, Whitfield said during the Academic Affairs Committee.

“I’m hoping by the end of the summer we might have enough information,” Whitfield said.  “We’re going back and going over student success data from years past to try and get a good picture of how successful students are relative to what their ACT and SAT may be.”

Also being looked at is student success data in programs with a modified admissions process, he said.

“That (data) will help us guide to an eventual decision because I think there’s still some concern on the board that we not use them (standardized tests) at all and well we do want to make that decision based on review and study,” Gaffney said.

“It can only go up from here between now and the end of August,” said Associate Provost for Student Success Monica Brockmeyer during a presentation in the Student Affairs Committee. “We have achieved this graduation rate goal that some years ago would have seemed so elusive and we achieved it more than a year early.”

WSU and more than 130 other universities have committed to eliminating educational disparities by 2030 as part of the Association for Public and Land Grant Universities Powered by Publics Initiative, according to Brockmeyer’s presentation. With a commitment to cut educational disparities in half by 2025, WSU is leading the schools it is grouped with in the initiative.

While WSU graduation rates have increased, disparities can still be seen.

With other institutions commending WSU for the progress made toward closing education gaps, Wilson said the BOG needs to say what they think is “appropriate.”

“The whole country has said that what we’re doing is a model,” Wilson said. “It’s hard to get better than number one in the country, so the board needs (to) say instead of just being number one, we need to be number one by this margin or whatever.”

WSU’s Black graduation rates increased in 2020, according to Brockmeyer’s presentation.

Governor Shirley Stancato agrees with the urgency in which disparities need to be addressed and recognizes that WSU is moving in the right direction, she said. The next steps to address this must include everyone at WSU.

“Everybody is responsible. Everybody in the university, professors, folks in the admissions office,” Stancato said. “Everybody has accountability to close the gaps in African American students, and Latino students and others.”

The BOG passed other items at the meeting:

The next BOG meeting is scheduled for Sept. 25.