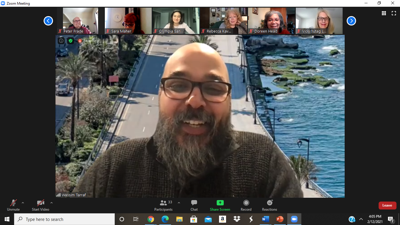 EACPHS Interim Dean Cathy Lysack said in a Feb. 11 email to The South End this event was organized to provide community members the opportunity to “walk away with a much deeper appreciation that people do not have equal opportunities in life – including an equal opportunity to achieve good health.”

Wassim Tarraf, an associate professor of occupational therapy at WSU, led the discussion. Tarraf is also an affiliated investigator on the largest epidemiological study of diverse Hispanic/Latinos in the United States, according to EACPHS.

“Blacks and Hispanics are 1.5 to two times more likely than their white counterparts to have hypertension and diabetes,” Tarraf said.

These health disparities are neither need-based nor voluntary, Tarraf said. On the contrary, they are caused by underlying social factors such as education, community and economic stability which affect life expectancy rates.

Some progress has been made, Tarraf said. In the 1970s, there was a 16-year life expectancy difference between Black males and white females – today, it's about 9.5 to 10 years. Nonetheless, this does not mean the gap in healthcare is shrinking.

Since disparities started being studied in the early 1980s, there has been very little progress made in terms of addressing them, Tarraf said. There is still value in defining the problem before preparing to resolve it.

“If you follow the definition, then you can potentially come up with a way to measure it, and if you can measure it then you can solve it,” Tarraf said. “A disparity is created by a social system, and it can only be addressed by the social system itself… It is really social determinants of health that form the primary backbone of what leads to these differences between groups.”

The effort to close disparities is made even more difficult by health professionals who do not recognize they could be part of the problem, Tarraf said.

A paper published a few years ago asked primary care physicians about their opinion on the care provided to their patients and if they think there are disparities in that care, Tarraf said. When looking across the field, 90% of physicians acknowledge that there is a problem.

“When you narrow the question to have it focus on their own health system, that [percentage] shrinks to about 30% to 35%,” Tarraf said.

Tarraf is currently studying the disproportionate mental health effects of COVID-19 on people of color. Data from an ongoing U.S. Census Bureau self-report survey on mental well-being during the COVID-19 pandemic found a significant difference between people of color and white people in the U.S., he said.

Professor Mary Beth O’Connell asked Tarraf whether the survey results have shown the effects political and social events in 2020 may have had on rates of depression and anxiety.

In response, Tarraf said accounting for those factors in his research is challenging.

“In a perfect world, what we’d have is a pre/post where we can control for things prior to these events and actually see if through that control we can explain some of these differences. In reality, the answer is we can’t get that through the data,” Tarraf said.

Due to this obstacle, Tarraf said he and his colleagues are looking into conducting a nation-wide comparison to reduce outside effects on their data.

Lysack said she believes every student graduating from EACPHS must learn about disparities —and it's the faculty's job to educate them.

“There are many social forces that privilege some people over others in our society and to think the path is equal is simply wrong,” Lysack said. “Life chances are not equal and we must continue to strive toward a better health system which recognizes these differences and how they shape human health.”

The EACPHS will hold its next Black History Month event, Black Women in Leadership: Our Struggles, Our Determination, Our Success, Feb. 19 at 4 p.m. via Zoom.