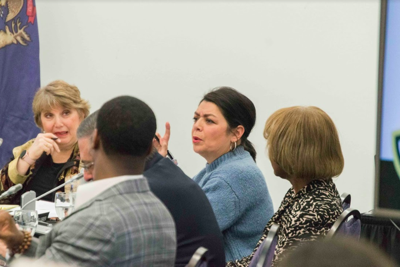 The board unanimously elected to reconsider the remaining items on the previous meeting’s agenda, which were voted down 4-4 on Jan. 31 in the McGregor Memorial Conference Center.

At the Dec. 6 meeting, the board found itself in deadlock on various agenda items.

The board will reconsider approving the establishment of a new master’s degree in environmental and sustainability engineering.

According to the construction cost authorization increase, the Division of Finance and Business Operations asked for an additional $685,000 for the project. The additional budget increase makes the total project about $2.8 million.

The board also approved increased spending toward the renovation and construction of the Hilberry Gateway Performance complex. The BOG voted to spend an additional $4.5 million for a total project cost of $69.5 million.

Students and faculty raised concerns about Wayne State’s lack of diversity and lack of working elevators.

Associate professor of communications Hayg Oshagan criticized the university’s handling of ongoing elevator issues. He said there have been 139 calls to police related to elevator entrapments.

He said the administration has taken three months to resolve issues that can be handled in three days.

Political Science major Megan Dombrowski called on the governors to make the first week of February “National Gun Violence Survivors Week.” Barnhill asked to suspend the rules so the governors could immediately vote on adopting the resolution. It passed unanimously.

“We were shocked that it happened,” said Dombrowski. “We’re so grateful to the Board for passing the resolution.”

Dileonte Jones and his parents Monique and Michael McCullough told President Wilson he should recruit more black students, staff and faculty, or resign.

About eight hours before the meeting took place, the Detroit Free Press published a story detailing confrontations between board members and President Wilson over email.

The upset was over a Jan.19 Crain’s editorial, written by former health affairs consultant Dwight Monson. Monson was previously tasked with negotiating a partnership with Henry Ford Health Systems that was rejected last year. He claims board member Michael Busuito and Thompson have conflicts of interest, which lead to the board strife.

In an email to Wilson, Thompson and Busuito accused Wilson of orchestrating the article to create a “media firebomb,” the Free Press reported. Wilson denied any involvement, saying he hadn’t spoken with Monson in a year.

“(Monson) left Detroit almost a year ago,” said Thompson after the meeting. “We paid him $2 million for what he was doing. To write a letter basically accusing the board of conflicts, it’s a distraction. That’s what all of this is really about, not wanting the board to do our jobs.”

Other things that happened at the meeting: