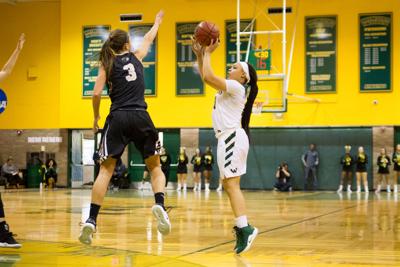 Wayne State’s men’s basketball team scored a 90-74 win over Purdue Northwest, while the women’s team posted a 93-68 win at the Matthaei on Feb.16.

Midway through the first half, senior forward Jovan Henderson scored eight straight points to spark an 11-0 run that put WSU ahead 36-28 with 2:30 left before halftime. WSU would score on their final six possessions of the period to take a 48-33 lead into the intermission.

Davis led WSU with a game-high 27 points, with Henderson adding 22 points and 12 rebounds.

The trio of Hawkins, Williams and Villemure combined to score WSU’s first 20 points of the game as the home team held a 20-11 lead with 4:06 left in the opening quarter.

Junior guard Nastassja Chambers became the 18th player to reach the 1,000 point-club in program history late in the first quarter as she scored six of WSU’s final eight points of the period, and the Warriors led 30-15 after one quarter.

In the second period, Hawkins scored five straight points to extend WSU’s lead to 39-21 with 7:09 left in the first half. WSU maintained their double-digit lead for the rest of the half and led 49-34 at halftime.

Purdue Northwest would close the home team’s lead to 51-41 with 6:24 remaining in the third, before WSU went on a 17-5 run to end the quarter to take a 68-46 lead into the final period. WSU’s lead never dropped below 20 points in the final quarter as WSU sealed the win.

After the game, Hawkins said the team looked to improve its defense when Purdue Northwest made a run in the third quarter.

“Though we were putting the ball in the basket, we were missing a lot of defensive assignments that we knew that we had to change or the game would’ve been a different way,” Hawkins said. “So we had to lock in on defense as well as continue to put the ball in the hoop.”

“Right from the jump she had not only her teammates engaged, she had the crowd engaged and even as (coaches) the whole staff wondered ‘I wonder what she’s gonna do next?’, Lohr said.

Lohr said that getting the Senior Day win was critical for the team.

“It’s a game that we needed to win (and) it’s a game we needed to win if we want to extend our season beyond the next three games,” Lohr said. “So as exciting as it is today, we need to build off of what happened and not let there be a letdown next week.”

The men’s team improved its record to 7-15 (6-11 GLIAC) with the win and remains two games out of the final tournament spot with three games remaining, while the women’s team is now 13-12 (8-9 GLIAC) on the season, and now holds the fifth spot in tournament seeding.

Matt Williams is sports editor of The South End. He can be reached at mattmwilliams86@gmail.com. Cover photo by Michael Dubicki. Teaser photo by Lauren Bryne.