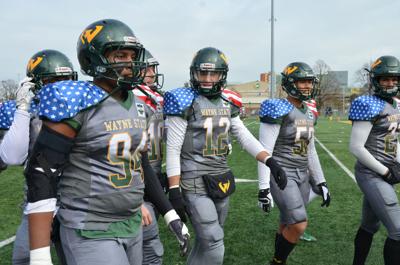 WSU scored the first points of the game on their second possession of the opening quarter as senior running back James Hill scored his 13th touchdown of the season, a one-yard touchdown run to give the Warriors a 7-0 lead.

GVSU scored on a 13-yard touchdown scamper to tie the game on the following possession. WSU reclaimed the lead on the next play from scrimmage as senior wide receiver Darece Roberson Jr returned the ensuing kickoff 96 yards for a touchdown, putting the Warriors ahead 14-7, which was the score after the first period.

GVSU scored the next ten points of the game to pull ahead 17-14 late in the second quarter. WSU tied the game on the final play of the first half as freshman kicker Niccolo Seilo converted a 33-yard field goal to tie the game at 17 at the intermission.

WSU took the lead for good halfway through the third quarter, pulling ahead of the Lakers as junior quarterback Jake AmRhein found Roberson for his second touchdown of the game; a five-yard touchdown pass to give WSU a 24-17 lead.

The Warriors would maintain their one-score advantage heading into the final quarter. The turning point of the game occurred halfway through the fourth quarter as GVSU drove to the 34-yard line down one score.

An interception on a third-down play by sophomore safety Tieler Houston, who returned the pass 27 yards, coupled with a GVSU unsportsmanlike conduct penalty set the Warriors up on the Lakers side of midfield.

WSU forced GVSU to punt on their next possession and used their rushing attack to gain four first downs and run out the remaining time to secure the win and end the losing streak versus the Lakers.

Nicholas helped pace WSU on offense by rushing for 156 yards on 28 carries, and was the team’s leading receiver, catching three passes for 45 yards. AmRhein completed 12 passes for 136 yards with touchdown passes and no interceptions.

WSU’s defense put its stamp on the game by posting seven sacks and holding WSU off the scoreboard in the second half.

The win snapped WSU’s 30-game losing streak to GVSU, with WSU’s last win coming in 1984, also in Allendale, and earned the Warriors the Wooden Shoes Trophy, which goes to the winner of the meeting between the two teams.

WSU concludes the regular season with an 8-3 overall record, the highest win total for the team since 2011, and took second place in the conference with a 7-1 record  — the team’s highest finish in eight years.