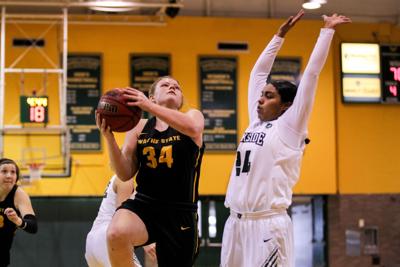 The Wayne State University women's basketball team swept their series against the University of Wisconsin - Parkside at the Matthaei Center. WSU won the first matchup 69-60 on Feb. 12 and then pulled off an overtime victory 82-77 on Feb. 13.

On Friday, Head Coach Carrie Lohr coached her 200th game. Lohr said she is honored to be in her position.

“Oh man, it makes me feel aged,” Lohr said, with laughter. “My time here though has been some of my fondest memories. I just feel really fortunate now, especially during a pandemic, to be a part of something I have such a strong passion for.”

The first half of Friday’s game was a mixture of pure defensive control and unexpectedly strong offensive showings from WSU. At the game’s 6:38 mark, junior guard Kate Sherwood led WSU to an early 9-2 lead.

With 5:21 remaining in the quarter, the breakout star of the weekend, sophomore guard Kate McArthur checked into the game for the first time. Prior to this weekend’s series, McArthur had not seen the court too often, Lohr said.

“In her one year at Central Michigan, she had very limited court time and because of the pandemic, there was an inability for us to get together. She’s been having problems finding her role and gaining experience, for her, it’s been about two years since she’s really played,” Lohr said.

In the first half, McArthur scored 11 points. Before this game, McArthur’s previous career-high was only four points. With her help, WSU took a commanding 38-23 lead to close the half.

The beginning of the third quarter could not have been any further from what WSU wanted to see. After an imposing first half, WSU came out flat as UWP went on a 7-0 run for the quarter’s opening three minutes.

Junior forward Sam Cherney quickly turned WSU’s fortunes as she scored on back to back layups, putting WSU up 48-38 with 4:20 left in the quarter. Later, with four successful free throw attempts from senior guard Kara Wilson, WSU ended the third quarter with a 54-45 lead.

In the fourth quarter, McArthur nailed the first bucket for WSU, a three-pointer that put them ahead 57-45 with 9:40 left in the game. After that, WSU never looked back and never so much as gave UWP the opportunity to bring the game to within single digits.

McArthur finished the game on Friday with a stunning new career-high 20 points and four rebounds, as WSU picked up a solid 69-60 victory.

Saturday’s game, senior day, also was much different than in previous years. Instead of the love and admiration coming from parents and fans alike from the stands, it was an unusually quiet celebration. Lohr said seeing the spectacle really took her aback.

“I can’t believe it’s senior day. It felt like we had just started the season. But I’m just happy we could honor our two seniors [Kara Wilson and Ariel Bethea],” Lohr said.

Alas, the game carried on despite the strangely somber atmosphere for a senior day celebration. This time around, UWP came ready to play with a far more aggressive defense in the opening quarter of the game.

In the game’s first quarter, WSU had a difficult time getting the lid off the basket, as they shot 4-16 as a team. However, UWP’s aggression helped send WSU to the free-throw line five times in the opening quarter, of which they hit all five shots.

At the same time, WSU’s defense was also tenacious. In only the first quarter, they combined for seven steals. However, the problem was capitalizing on the abundance of forced turnovers, as they could only score twice on the ensuing possession. The inability to take advantage of UWP’s mistake was a key factor in WSU trailing 18-13 heading into the second quarter.

WSU and UWP played one another tightly as the second quarter was slow scoring and focused on defense. This was evident in the 30-29 score at halftime.

Since losing junior forward Grace George for the season, defense has been an issue for WSU. However, Lohr said she felt as if WSU was finally turning the corner through such defensive performances.

“Since we lost Grace, we struggled a lot and those games came at us so quickly we never had time to find our roles. But I really think we’re starting to come together. I think today and yesterday really worked because of genuine energy here,” Lohr said.

After halftime, it was once again Cherney’s time to shine as she scored eight of the 20 points WSU posted in the third quarter. WSU wasn’t able to make up much ground as they still trailed 52-49 heading into the final quarter.

The fourth quarter was tight, as UWP held onto the lead for eight minutes to start the quarter. With 2:08 left in the game, McArthur hit a three-pointer that put WSU ahead 66-65. Both teams began swapping the lead back and forth.

With nine seconds left in the game, McArthur hit two key free throws to put WSU ahead 70-67.  But, coming out of the UWP timeout, there was just enough time to tie the game back up as UWP hit a buzzer-beater three-pointer to send the game into overtime.

In overtime, WSU looked like they were going to put away UWP early after jumping out to a 77-70 lead. UWP tried fighting back but ultimately never so much as regained the lead again.

In the end, WSU closed the game 82-77 in overtime on the back of McArthur’s new career-high of 22 points and Cherney’s 11 points and 18 rebounds. It was Cherney’s fifth double-double of the season.

After the game, Lohr said she was very proud of the progress Cherney has made this season.

“I’m really happy for Sam. She’s an analyzer and early in her career, she would get herself caught up so much. It’s rewarding for me as a coach for her to be able to stop being her own worst enemy, now she can back up that game with steady numbers,” Lohr said.

Looking forward to the last games of the season, Lohr said she was excited about the opportunities McArthur could open for their offense if they can rely on her scoring on a consistent basis.

“We know that Kate has the potential to do that. That’s the type of player she was in high school and the type of player we anticipated when she came to Wayne State. I think she can become an x-factor for us and help other players avoid double teams,” Lohr said.

WSU women’s basketball will return to the Matthaei Center on Feb. 16 to play their final regular-season home game against Ashland University.