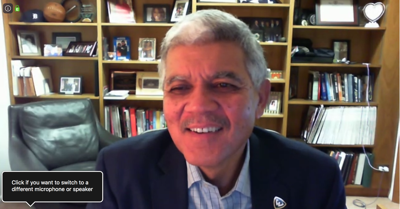 The Student Senate hosted its first tele-town hall meeting on Zoom with President M. Roy Wilson and the university’s coronavirus committee on March 25. For over an hour, Wilson and numerous university administrators replied to a stream of questions from the student body.

Virtual clinical trials and studio classes, and even a possible virtual graduation ceremony, are just some of the compromises university officials are discussing during an exponentially evolving national pandemic.

"None of this is optimal," said Darin Ellis, associate provost for academic programs.

Wilson said despite the circumstances, the university will not issue refunds for classes that have moved online. The move would be financially impossible, he said.

“This is going to be a huge financial hit for all universities,” Wilson said. “I fully expect that some smaller colleges are gonna either not make it, or there’s gonna be mergers. We’re big enough that we’re gonna come out of this and be okay.”

University officials are exploring a route to adopt a pass/no-pass grading system for graduate classes, similar to the new policy for undergraduates, Ellis said. However, he made no promises.

“At this time we're not able to say. But people are working hard to find if that's feasible," Ellis said.

The committee is exploring an online graduation ceremony for students earning their diploma May 2020. Other possibilities include moving the ceremony to August or even December, Wilson said.

Students who are unable to access online resources can obtain one of 75 remaining Google Chromebooks from the campus pantry. On Monday, the pantry will also have 50 WiFi hotspots available, Chief Information Officer Daren Hubbard said.

Because of heightened unemployment, university officials are considering changing the payment deadline for future semesters. A full announcement is coming by the end of the week, Dawn Medley, associate vice president for enrollment management, said.

“There is talk about unlocking (student) accounts to register for classes, even if they owe money,” Medley said.

Medley encouraged FAFSA enrollees, whose incomes have recently decreased, to notify the financial aid office. Employees can perform professional judgment, reserved for “special or unusual family or student circumstances,” which may qualify students for additional aid.

International students transitioning to online classes should not have their F-1 visa status affected, according to Ahmad Ezzeddine, associate vice president for educational outreach and international programs.

Ezzeddine said the U.S. Department of State and the Department of Homeland Security have relaxed certain requirements for the F-1 visa. This ensures that online classes don’t affect international student's visa status.

However, the office is waiting on further guidelines to see whether students who leave the country “are able to continue where they left off,” he said.

Wilson encourages students to continue working toward their degrees, despite obstacles. However, he expressed concern about the effect social isolation might have on students.

“As busy as I am during the day, just being by myself except with my wife, it’s beginning to be the same routine,” Wilson said. “We have to find ways to stay outside our immediate environment.”

Wilson expressed interest in having another tele-town hall in the near future.

As of Wednesday, 12 COVID-19 cases are linked to campus. Detroit has 705 presumptive positive cases and 12 deaths as a result of coronavirus, the highest of any city or county in the state, according to state tallies.

Cases in Detroit are accelerating at one of the fastest rates in the nation, second only to New York and New Orleans, according to a data analysis by Bridge Magazine.