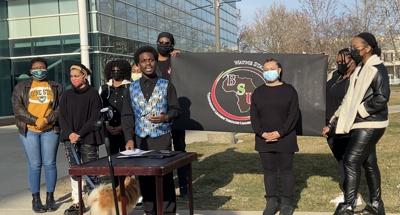 The Black Student Union held a press conference Wednesday on Gullen Mall, demanding changes they would like to see be made on WSU’s campus to protect Black students and faculty.

The event began with BSU president Jeremiah Wheeler taking to the podium and expanding on previous demands, which included funding for the Department of African American Studies and a physical space on campus for BSU.

“We demand that Wayne State University and the Office of Housing and Residential Life take a public and bold stance against racism and all its enablers, while at the same time discovering and dismantling all policies and people that uphold institutional racism,” Wheeler said.

The demands come a week after BSU held a protest in support of WSU student and BSU member Zoriana Martinez. The door to her room in Leon H. Athicson hall, displaying Black Lives Matter stickers and a Pride flag, was vandalized with eggs on Feb. 16 and again on March 1.

“I’ve gotten a lot of responses and messages for some solidarity from different staff and faculty saying they support me. I've also got a few responses from speakers of groups and programs saying that they support us, so that’s been amazing,” Martinez said.

During the press conference, Wheeler advocated for radical behavioral change or the removal of Director of Residence Life Nikki Dunham. He said Dunham continues to “avoid accountability and absolves herself of any wrongdoing,” instead of proactively taking steps to prevent racist incidents in housing.

The list of demands included concerns involving housing and other areas of the university:

Further review of the demands is needed prior to taking action, WSU Director of Communications Matt Lockwood said in an email to The South End Wednesday.

“Before we can respond to anything specifically, we have to take a closer look at the BSU’s requests and take into consideration the university’s circumstances as a whole during this challenging environment. As always, we remain committed to working with our students to ensure Wayne State’s place as a welcoming, diverse and inclusive campus,” Lockwood said.

“In terms of tangible change here on campus, we need to expedite the process. What the university has yet to realize is that what we’re saying as Black students, it’s life and death for us. These are urgent manners, if they cannot adhere to these demands then they don’t respect us and they don’t value our lives,” Wheeler said.

BSU met with President M. Roy Wilson and the WSU Board of Governors Tuesday, Wheeler said.

“We read them these demands. Some of them showed what appeared to be sincere answers. Some of the ones around housing said housing should be more affordable and that the situation with Zori should have been handled more swiftly and better,” Wheeler said.

“I think now is just the waiting game to see what happens, to see how the university responds, to see if they kind of try to twist it. It can go in so many different ways but hopefully we'll get the response that we want, and we'll see the change that we want,” Martinez said.

“Some of them (BOG members) said that the African American Studies Program is marked for growth, but it wasn’t evident that growth was as urgent as it needed. To be marked for growth doesn’t mean there’s much given, that the last hiring was in 2015 and one before that was in 2016,” Wheeler said.

“The fact that we don’t have a physical, tangible, union on campus for Black students, a Black student office or building, it’s crazy. It’s kind of like we’re unwelcome. They push us into predominantly white housing and institutions, and it sets us up to be victims,” Patwin said.

Patwin said she worried WSU wouldn't listen to the demands.

“I feel like a lot of the organizations on campus are being held under the school’s foot. We really have to make our own path because the university is only going to do so much. They’re going to patronize us, and we have to be willing to make that change on our own,” Patwin said.

Wheeler asked the campus community to join calls for WSU to implement the demands, he said.

While not committing to any tangible changes, Lockwood said WSU may embrace some of the demands.

“Wayne State’s Social Justice Action Committee recently completed its report after eight months of examining internal policies, procedures and practices to identify racial inequity and bias throughout the campus. It is possible that some of the BSU’s requests may be incorporated into some of the committee’s recommended actions,” Lockwood said.

The time for change is now, Wheeler said.