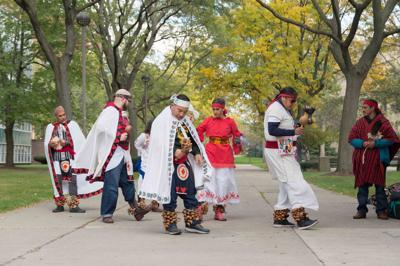 NASO’s purpose is to provide cultural and educational opportunities to WSU and unite Native American students while bettering the community, according to the organization.

“I think it’s really important to learn about the different aspects of culture, especially Native American culture because I feel like we don’t learn enough about it,” said Kristen Johnston, OMSE Academic Advisor.

Events organized to celebrate this month included a screening of the documentary “Two Spirits,” which pays homage to LGBTQ members of the Native American community, a discussion with WSU alumna Karen Marrero on her new book “Hidden Channels: Researching and Writing a History of Detroit’s Early French-Indigenous Families” and a student-led call to action to indigenize the curriculum, organized with the University of Michigan’s Native American Student Association.

NASO also hosted a showing of the Native American band Innastate: Indigenous Reggae Straight From the Dessert on Nov. 18.

“There's a lot of racial and social justice being brought to the forefront and the reality is we were here first and our lands were taken away,” band member Romeo Alonzo said. “Basically, we experienced the genocide, and with culture being so dominant right now it's important to understand who we are as people, that we've survived and that we're still here.”

The annual Peace and Dignity Ceremony, held virtually on Oct.12, commemorated the resilience of Indigenous peoples of the Americas, according to NASO.

“The ceremony brings awareness to the land, acknowledgment of the land and the focus on the community versus the mass population,” Savala said. “It's usually around Christopher Columbus day.”

The event usually takes place on campus, but this year was hosted via Zoom due to the COVID-19 pandemic, NASO Treasurer Alexis Estes said.

“Usually, it brings in these different people from the communities, like elders, where they share their stories by this tree and we usually leave prayers,” Estes said.

In April, Student Senate passed a resolution supporting a campus-wide provisional land acknowledgment to respect the legacy of Native Americans.

“Land acknowledgments serve to illuminate ongoing indigenous presence, as well as recognize and counter settler-colonial legacies of violence and land expropriation,” the resolution said. “The purpose of these statements is to show respect and honor the indigenous peoples that this land has been home to since time immemorial.”

OMSE is hosting another virtual event in celebration of Native American Heritage Month on Nov. 30, discussing electric Pow Wow and “the blending of Native sounds.” Click here to RSVP.

Grace Reyes is a contributing writer for The South End. She can be reached at gracereyes@wayn.edu.

Cover photo taken by Jonathan Deschaine at the 2019 Peace and Dignity Ceremony. He can be reached at jonathan.deschaine@gmail.com.