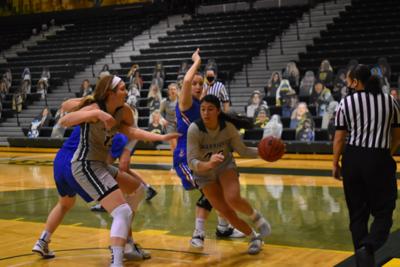 The game marked the opening round of the 2021 Great Lakes Intercollegiate Athletic Conference Women’s Basketball Tournament.

In the opening period, the LSSU Lakers got off to a fast start, using three triples to take an early 13-5 lead with 6:23 left in the first quarter. WSU responded with a 15-0 run, highlighted by two triples from McArthur and one from Miller, to take a 20-13 lead with 2:24 remaining in the quarter.

Following the theme of the period, LSSU scored the next eight points to pull ahead 21-20 with 51 seconds left. Both teams scored on their final possession of the first quarter, with the LSSU Lakers’ basket giving them a 23-22 lead.

Following a basket by the LSSU Lakers that tied the game at 28 early in the second quarter, WSU used a 10-0 run, punctuated by two three-pointers from sophomore guard Kate McArthur, to take a 38-28 lead. The Warriors maintained a two-possession advantage for the rest of the period, and a triple by junior guard Alexis Miller one second before halftime gave WSU a 44-35 lead at intermission.

Senior forward Tori Perez scored seven of her team-high 17 points in the third quarter, as WSU began to pull away from the LSSU Lakers in the quarter and took a 63-48 lead into the final period.

“I think Tori has really done a great job of stepping in and helping us be a presence in the paint, helping us defend and also grabbing some rebounds,” Lohr said. “So (it’s) really nice to see hard-working players that are maybe under-the-radar emerge and have a good scoring night like Tori did tonight.”

In the final quarter, freshman guard Jolee Houle scored WSU’s first five points of the period, giving the Warriors a 68-53 lead. WSU maintained a 15-point lead for most of the period to seal the victory. Freshman center Halle Barnett scored the Warriors’ final points at the Matthaei Center with a layup on the team’s last possession of the game.

Lohr said she was pleased with WSU’s ability to withstand LSSU’s start to the contest.

“I thought that Lake Superior came in and really gave us a good punch,” Lohr said. “But I felt we responded, didn’t lose our composure and we were able to work our way out of the (early) hole.”

While reflecting on the Matthaei Center’s basketball tenure, Lohr said support from fans during games fostered a positive atmosphere pre-pandemic. However, she’s looking forward to the new WSU basketball facility slated to open in fall 2021.

“I’ve enjoyed my time at the Matthaei,” Lohr said. “For the last 10 years, it’s become home for me and my teams, but I’m also very excited to venture into the new arena and create some positive memories there as well.”

WSU advances to the quarterfinals of the GLIAC tournament Thursday. Lohr said she has positive expectations for the game.

“I think that both teams are competitive,” Lohr said. “We obviously split two weeks ago in Saginaw, and we have an opportunity to play them again on a neutral floor and we’re definitely looking forward to the challenge.”

Women’s basketball will travel to the H.D. Kesling Gymnasium in Westville, Indiana, to face off against Saginaw Valley State University at 3 p.m. Thursday.