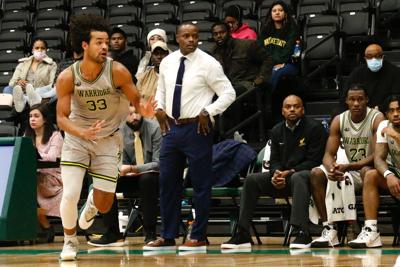 Wayne State men’s basketball suffered their fifth loss of the season to Saginaw Valley State University on Saturday at the WSU Fieldhouse, with a score of 67-55.

A pregame COVID-19 scare took out four starters and a key role player, setting the Warriors at a disadvantage before the game even started.

From there, Stoll called the Campus Health Center on Saturday to get the entire team scheduled for rapid tests before the game, Haralson said.

Haralson said the Warriors were in a frenzy when Stoll notified them during their pregame meal that they all had to rush to get a COVID-19 test immediately just hours before tip off.

“We are scheduled for an 8 o’clock shoot around,” Haralson said. “Guys come in and do the pregame meal at 9 a.m. then we get these texts from Drew (Stoll), ‘Everybody immediately go over to the (Campus) Health Center and take a covid test,’ so now we’re panicking.”

Haralson said after the team took the COVID-19 tests, the players had to quarantine until their results came back. When the results arrived they devastated the Warriors.

“So now we get the results and Ray (Williams Jr.) has a negative test but he’s showing symptoms so he’s out. Avery (Lewis) tests positive so he’s out. Darian test comes back positive so he’s out,” Haralson said. “Now all of this is when we are supposed to be actually walking into the building and preparing for a game.”

The Warriors were now down their two starting point guards in Neely and Owens-White, along with leading scorer in redshirt junior forward Lewis and another key starter in sophomore forward Williams.

This forced WSU to get creative with an almost entirely new look, starting five with several players who had yet to play meaningful minutes in a big time game.

Haralson said WSU first started with identifying a player to handle the ball in the absence of Neely and Owens-White, which led to freshman guard Freddy Johnson to have his first breakout game of the season.

“You have four of your starters out, so the first thing you say is ‘who can handle the ball’? So you start doing your roundabouts,” Haralson said. “Freddy has a lot of point guard experience, so we knew that Freddy was there.”

Johnson led the Warriors in scoring on the night shooting 37.5% from the field with a team high of 15 points. He also led WSU in assists with 3 on the night.

Haralson said he knew Johnson was a capable player and this game has made him more comfortable in expanding Johnson’s role the rest of the season to help spell Neely and Owens-White when needed.

“Everybody knows that Brailen and Darian average about 30 to 35 plus minutes a game, so you know Fred being able to come in and give us some minutes I told him in the locker room he gained a lot more confidence from me,” Haralson said.

Despite being down four starters and a key bench contributor, the Warriors were in it for most of the entire game, even leading by nine points in the second half.

In fact, the Warriors controlled the lead for over 20 minutes whereas SVSU only led for 17 minutes.

One critical factor which came up big late in the game was turnovers. WSU turned the ball over to SVSU 18 times during the game, which SVSU capitalized on as they amassed 22 points off turnovers.

Late in the game SVSU went to a full court press, where they utilized a trap defense and forced the Warriors to get the ball to other players hands besides Johnson. This is where SVSU took over.

Haralson said the Warriors’ new lineup  on the court and lack of ball handlers led to them getting out worked late in the second half.

“I thought that it was more so our inexperience late in the game than their pressure,” Haralson said.

Johnson said the Warriors’ lack of board presence and defensive fight also contributed to their loss against SVSU.

“Towards the end we had a poor rebounding spurt where we were giving too many offensive rebounds up and just not playing hard anymore,” Johnson said.

Haralson said this past game will help the Warriors because they now have a greater understanding of their depth on the team moving forward.

“I think this game will help because now we can see a little bit of depth,” Haralson said.

However, with WSU COVID-19 protocols and possibility of more members of the team testing positive, Haralson said he just wants to make sure he has a team to practice with.

The Warriors were set to partake in the U.S. Virgin Islands Basketball Classic on Dec. 31 and Jan. 1, facing off against Point Park and Fisk Universities at the Antilles School Mark C. Marin Center. However, both games have been canceled, according to WSU Athletics.