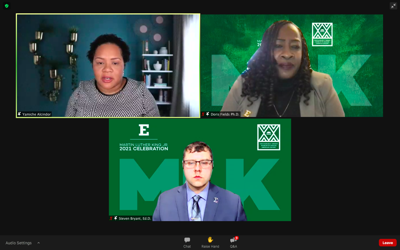 PBS NewsHour White House correspondent Yamiche Alcindor gave the keynote address, discussing the question King, other civil rights leaders and many racial justice activists have asked: Are we going to grapple with racism or is it going to possibly threaten and topple our democracy?

King gave his last speech on April 3, 1968 in Memphis, Tennessee — giving his support to striking Black sanitation workers. “[T]he world is messed up. The nation is sick, trouble is in the land, confusion all around,” King said. He was shot and killed at his motel the next day.

“As I reflect on Martin Luther King’s goals, and the time period in which he lived, I can only imagine what he would have said if he was living through these times because right now the world is really messed up,” Alcindor said. “We are being forced to grapple with the nation's original sin —slavery— and the cascade of inequity that followed the decision to steal the land from Native Americans to create America, and to build the nation on the backs of African Americans.”

During this time, Americans are forced to look at how white supremacy continues to impact every part of the United States, she said. King talked about how he believed the arc of the moral universe bends toward justice. While Alcindor agrees, she said she thinks we help it bend toward justice through individual work.

“Each and every one of us is tasked at this moment, to use our talents, our history, our art, our skills, our networks, our resources, to bend the moral arc toward justice,” Alcindor said. “And it needs to be bent and molded continuously for anyone to get any sort of justice at all.”

In a New York Times opinion piece, published after his death, Rep. John Lewis wrote, “Democracy is not a state. It is an act, and each generation must do its part to help build what we called the Beloved Community, a nation and world society at peace with itself. Ordinary people with extraordinary vision can redeem the soul of America by getting in what I call good trouble, necessary trouble.”

Journalism is Alcindor’s good trouble, she said. She became a journalist because of Mamie Till, the mother of Emmett Till, who used her pain to bend the moral arc. Fourteen-year-old Emmett Till was brutally killed in 1955 after a white woman accused him of flirting. A Google search Alcindor did in high school put a face to Emmett Till’s name for the first time.

Alcindor did not imagine that she’d be covering similar stories of young Black men and women whose lives were threatened by falsehoods, stereotypes and a systemically racist political system, she said.

“That is exactly where I find myself and where this country finds itself,” Alcindor said. “Our world is filled with injustices and inequality, and it's really up to all of us to use our God-given talents to figure out how to change it in whatever way we can.”

Before Emmett Till inspired Alcindor to be a journalist, his murder was a catalyst for 20th century civil right movement. On Aug. 28, 1963, exactly eight years after Till’s murder, 250,000 people gathered in Washington D.C. for the the March on Washington for Jobs and Freedom.

In a speech at the March on Washington, King said, “The Negro is still not free. The life of the Negro is still sadly crippled by the menicals of segregation and the chains of discrimination. The Negro lives on a lonely island of poverty in the midst of a vast ocean of material prosperity.”

Unfortunately, these words are still true today, Alcindor said. In the U.S., racial disparities remain prevalent, including in the economy, policy and healthcare.

“And it's not something that we should forget when the next administration, when the Biden administration, comes up, we need to continue to push and look at the impact of (race) on our society,” Alcindor said.

If King were living today, he would want to see a society that challenged and looked bluntly at itself, Alcindor said: Where are you not treating people equally? How might you be perpetuating white supremacy, even without knowing it? Where, in your life, are you fighting against white supremacy?

“History will have to record that the greatest tragedy in this period of social transition was not the strident clamor of the bad people, but the appalling silence of the good people,” King said.

Many people are complacent in the face of racial injustice, Alcindor said.

“So many people are silent in the name of being comfortable, of being safe. The lesson of these times I think should be to call out what is wrong when you see it and choose to be a voice for good,” she said.