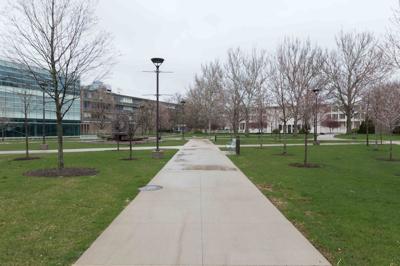 Editor's note: This article was updated to reflect a new decision from the federal government and the Office of International Program's announcement

The Trump administration rescinded a policy that would have required international students to take at least one in person course during the fall semester to remain in the United States.

The announcement came on July 14 at a federal lawsuit hearing, filed by Harvard University and the Massachusetts Institute of Technology which sought to prevent the rules from going into effect, according to the Associated Press.

"In light of today’s announcement, universities can revert to guidelines that went into effect in March. These guidelines allow continuing students who are in the U.S. to enroll in all online courses for the fall 2020 term," Ezzeddine said in the statement.

The proposed changes due to COVID-19 would have prohibited students from taking a full online course load while remaining in the U.S., according to a July 6 message from ICE. Students attending schools with a combination of online and in person classes were required to take the minimum number of online courses needed to continue “normal progress in their degree program.”

The message from ICE was "intended to provide additional time to facilitate the implementation of these procedures,” with the U.S. Department of Homeland Security expected to publish a final rule.

Wayne State plans to offer a hybrid model of in person and online classes for fall 2020, said Carol Baldwin, marketing and communications director for Educational Outreach.

“We believe that the hybrid model we are planning will provide students with the flexibility they need to continue making progress toward their degree at Wayne State,” she said.

Sudeshna Biswas is a graduate student employee from India and the international chair for the Graduate Employee’s Organizing Committee at WSU. She said this political decision impacted herself and others in many ways.

“I would say this is a pure form of discrimination – targeting international students and using them as a scapegoat,” Biswas said. “The government just wants to open back up the universities.”

Acting DHS Deputy Secretary Ken Cuccinelli told CNN in an on-air interview on July 7 that the new rules will “encourage schools to reopen.”

According to their website, the GEOC is a union fighting to protect the rights of graduate students at WSU.

“While the university at large has a pretty substantial international population, with full-time graduate students that number is much higher,” GEOC Political Action Chair Isaac Pickell said.

According to Pickell, about 30% of full-time graduate students are international students.

The recent announcement of new guidelines affected Biswas both mentally and financially, she said.

“I wanted to visit my family, but due to COVID-19 and travel restrictions my flight got canceled and I lost money. So I am financially struggling, I lost money and at the same time they want to send back international students and put their health at risk during a pandemic,” Biswas said.

These changes were not expected by schools across the U.S., said Sabrina Balgamwalla, director of the Asylum and Immigration Law Clinic at WSU Law School.

For spring and summer semesters, a temporary exemption to the SEVP allowed international students to take more online courses than previously allowed in order to maintain a full course load and nonimmigrant student status, according to ICE’s announcement.

“Part of the challenge is that people are trying to make very important decisions that are going to have a huge impact on students’ lives, but it is complicated to do that —partly because we are still waiting for additional guidance to come out about the rule,” Balgamwalla said.

WSU reviewed the new guidelines and were determining what areas of their fall plan would require changes, the Office of International Programs said in a July 8 statement.

“We have joined higher education institutions and associations from across the country who are calling for changes to these unfair and impractical policies and are mobilizing to advocate on behalf of our international students,” the statement read.

Many students, including GEOC members, could have been deported or not  allowed to re-enter the country if they left before the borders were closed, Pickell said. He suggested WSU create a one credit in-person class for international students —meeting once a semester with attendance not required and graded leniently or pass/fail.

“The university put out a statement a few days ago saying they support all of their international students but they have made no policy or decision that would actually support those students,” Pickell said.

Petitions created by University of Michigan and Michigan State University students demanded that their schools also take action and create a one-credit course to protect international students. Both colleges will have a hybrid fall class schedule.

GEOC conducted outreach to international students, wrote to WSU and made policy proposals, Pickell said. They also petitioned to be included in the Academic Restart Committee, specifically the research subcommittee, to make proposals focussing on the guideline changes.

Teaching lab courses in the Department of Biology and producing lab reports is part of her job, Biswas said. Due to lab closures from COVID-19, reports are already months behind.

“If I have to go back to my country, I don’t know if I can come back again or if they will issue my visa and let me come,” she said. “There will be a huge problem with falling behind and we can lose funding because we won’t be able to produce the reports. I have been investing the last few years to get something going. I won’t be able to get a job anywhere else right now.”

Biswas also expressed that timing and resources were a problem for students sent back home or unable to return to the U.S.

“There are huge time differences between some countries. My country has a 14-hour time difference,” she said. “We came here because we wanted an environment to study, it is not always possible to stay at home. We are here to learn multicultural benefits and different aspects of life.”

The OIP will provide more information when available.

Nour Rahal is a contributing writer for The South End. She can be reached at nrahal1@wayne.edu

Cover photo by Jonathan Deschaine, multimedia editor for The South End. He can be reached at jonathan.deschaine@gmail.com