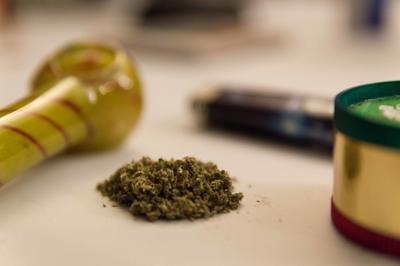 The team is led by Christine Rabinak, an assistant professor in the Eugene Applebaum College of Pharmacy and Health Sciences.

“The primary behavioral treatment for PTSD is called prolonged exposure therapy. We expose people to their traumatic event and have them rehearse it over and over again in the present tense,” Rabinak said. “The idea is that each time they recount it, their anxiety and the feelings that they feel start to become more manageable.”

This is followed by a process called extinction, in which the patient’s reduced fear level is used to create a new association with the traumatic stimulus.

“The problem is that people with PTSD or fear-based disorders go back to that fear,” Rabinak said. This is where the role of THC — the psychoactive chemical in cannabis — comes in, she said.

“Rodent studies found that the receptors for the cannabinoid systems are densely localized in areas of the brain that are important for learning and memory. If you block these receptors, animals will show anxiety-like behaviors,” Rabinak said. “However, if you give an animal an acute dose of THC prior to extinction, it’s enough to activate the receptors. The next day, they show very low levels of fear.”

The next step was to see if her findings in animal research could be duplicated in humans, Rabinak said.

“We found that in healthy people, if we gave them an acute oral dose of THC and then we do extinction learning with them, we see better maintenance of that extinction memory, so lower fear,” she said. “The idea is to use THC as an adjunct to exposure-based therapy to try to enhance the learning that occurs.”

Allesandra Iadipaolo, a graduate of WSU’s Department of Psychology and clinical coordinator of Rabinak’s lab, said the most difficult part of the research process was recruiting patients.

“We initially planned on working closely with the (Veterans Affairs) to get veterans and combat-exposed people with PTSD but that ended up not really working out,” said Iadipaolo.

The team then turned to local hospitals and clinicians, which ended up being another dead end, Rabinak said.

“The minute (clinicians) hear ‘THC,’ they’re conflicted on it,” Rabinak said. “They feel like they’re sending a conflicting message.”

Eventually, Rabinak and Iadipaolo decided to post ads online, which helped them find students and faculty to participate in the study.

The next phase of the study will involve using the findings in an authentic clinical setting, Rabinak said.

“Next year, for the first time in Detroit, we’ll be offering prolonged exposure therapy for people with PTSD,” she said. “It’ll be double-blind, so we won’t know what the participant is getting, and neither will they. We randomize them to either placebo or THC.”

Iadipaolo said that interacting with participants has been one of the most rewarding parts of the research.

“Hearing their stories is really incredible and eye- opening,” Iadipaolo said. “You really gain an appreciation for people, what they go through and how resilient they are.”

Rabinak said that students interested in participating or assisting with the research shouldn’t shy away based on their course of study. She said a large and diverse team is crucial to the program’s success.

“We’ve got students from all over campus that are working in the lab — undergrads in engineering, biology, psychology (and) public health,” Rabinak said.

Students can learn more about WSU’s THC/PTSD research and volunteer to participate by visiting https:// cphs.wayne.edu/research/tnp-lab-participate.php.