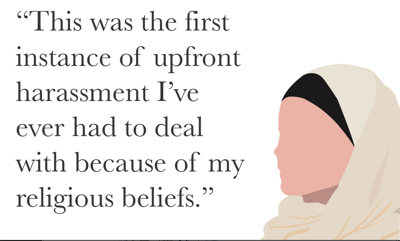 What would you do if you saw someone being religiously or racially discriminated against on campus? Would you watch the ordeal or would you step in to solve the situation?

As generations progress, it’s important to ask ourselves these questions. They tell us a lot about who we are and who we will become after we graduate and move into our professional lives.

My name is Selma Dajani, and within three weeks of being at Wayne State, I was harassed by a male student who used derogatory terms toward me and my friends in the Student Center.

We were in an open space surrounded by other students who watched the scene but  did nothing to step in and help. Instead of personally reacting, I ignored the student as I prefer to avoid conflict.

This was the first instance of upfront harassment I’ve ever had to deal with because of my religious beliefs. My friends and I were made to feel extremely uncomfortable. I don’t want anyone to be made to feel this way. Put yourself in the shoes of a person who has experienced this kind of harassment, would you want others to ignore the situation? Most likely you would not.

Before attending Wayne, I was told that it was a safe campus. Do I still believe that? I do. An incident like this won’t stop me from attending Wayne State. But there needs to be a campus wide discussion about what can we, as students, can do to prevent incidents of harassments like the one my friends and I experienced from happening again.

I recently contacted the student’s dean office to have a discussion about how the school can deal with issues of harassment and discrimination on campus.

When I called in to report the incident, they told me they were surprised to hear that this took place on campus. This got me thinking. Do these things occur often, but no one takes action? How often do they happen? Why do people shove such things aside if so? I really appreciate Wayne making time to review my case as it could possibly help improve safety and spread awareness.

But because my friends and I were not physically threatened or harmed, the University is limited in how it can respond. If we want our campus to be a safe and welcoming place for all students, we cannot solely rely on authorities.

I’m simply calling for a discussion amongst students. Students need to recognize that standing by and saying nothing when incidents of harassment occur they are inadvertently enabling harassment . We need to take responsibly, not just as students, but as adults. It is our duty to foster an environment that makes everyone feel safe. Being part of a community means you have to get involved.

Never be afraid to stand up to things happening around you. If you are harassed, don’t just write it off. Sharing and discussing incidents like these can help others by shedding light on them and expanding awareness.

So Wayne State, I ask again: what would you do if you saw someone being religiously or racially discriminated against on campus?

Cover graphic by Guneet Ghotra. Guneet is the graphic designer of The South End. She can be reached at gg8387@wayne.edu