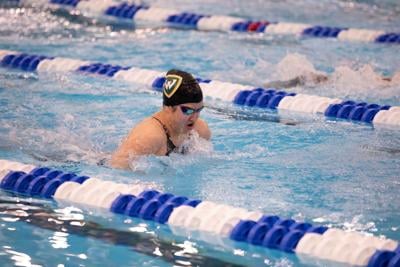 It has been more than three years since swimmer and Wayne State University premedical student, Jia Yi Koh, has traveled home to Malaysia. She said she considered a visit home over the summer, but decided against it since it would mean four weeks in self-isolation due to COVID-19 travel regulation—two in Malaysia and two when she returned to Detroit.

But being away from home has proved to be its own struggle. Out of everything, Koh said she misses hometown food.

“(M)y friends will send me pictures of food, saying ‘this is the only way to get you to come home!’” Koh said.

As the COVID-19 pandemic looms on, complicating international travel, student-athletes from across the globe are finding ways to stay connected with their teammates and families.

Tanja Skalda, senior at WSU and women’s tennis player, decided to return to Germany in March, where she’s currently staying with her parents, she said.

Though she keeps in touch with her teammates through texts and video calls, almost 7,000 miles separate Skalda from her team.

Being six hours ahead of Detroit’s time also presented challenges when it came to her classes. Skalda said her weekly quizzes started at 3 a.m., leaving her on an unconventional schedule.

On the other hand, Skalda enjoys being surrounded by family in Germany, she said.

For other international students, getting home was a tough feat.

Franz Mueller, fourth year mechanical engineering student and WSU swimmer from Germany, chose to stay in Detroit. Like Koh, Mueller said he wanted to return home for the summer, but it was difficult to do because of COVID-19 restrictions in Germany.

Linda Liong, tennis player and psychology student from Malaysia, also chose to stay in Detroit during the pandemic. Usually, Liong returns home for the summer to catch up with family, but with COVID-19 airline restrictions, this was made impossible, she said.

“I’m getting a little more homesick than usual,” Liong said.

This year was rougher than most, Liong said. She stayed connected with her team through Zoom meeting calls and group chats. Students on campus practiced once in a while, but they mostly worked out on their own.

“Now that we practice less, I think I have more time alone, and more time to miss home,” Liong said.

Skalda said she misses human interaction: walking around campus, sitting in classrooms and chatting with professors.

Mueller also had a busy semester, which included a required in-person lab and online classes, he said. He struggled to stay focused in virtual lectures and missed in-person interactions with peers and professors.

“It’s just not the same as being physically in the class,” Mueller said.

As a fourth-year student about to enter medical school, Koh said she worried about the repercussions of missing out on in-person labs. For her one in-person lab of the semester, Koh’s labs were reduced to three sessions.

However, Koh felt lucky to continue her role on the swim team, she said. They held short practices for a couple weeks in mid-October but stopped when someone was exposed to a positive COVID-19 case. Next semester, Koh is excited to return to some version of practices.

“Everything has been so weird, and I feel like going back into racing will make everyone feel better,” Koh said.

The GLIAC has not released a statement regarding an official start date for swimming and diving. According to Jeff Weiss, senior associate athletics director, they are hopeful to return in January.