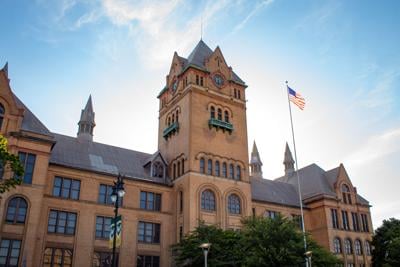 After serving as Wayne State’s president for ten years, M. Roy Wilson announced he will be stepping down in July 2023 to move away from university administration.

Wilson has served as president since and said it’s time for a leadership transition at WSU.

“And while my energy and passion for academic leadership is as strong as ever…(10 years) seems like an optimum duration — long enough to accomplish most goals and short enough to not tempt complacency — to serve as university president,” Wilson said in an email to the campus community on Monday.

“I don’t think he’s done much except use the student’s tuition money towards his salary instead of improving problems at Wayne State,” she said.

During his time as president Wilson has raised the overall graduation rate from 26% to 60%, and the Black graduation has risen from 7.6% to 40%, Wilson told Crain’s Detroit Business.

During his tenure the campus has changed visually with the addition of the Mike Ilitch School of Business in 2018 and the STEM Innovation and Learning Center in 2019. Most recently construction crews returned to campus this summer for the renovation of State Hall and to break ground on the new Hilberry Gateway Performance Art Complex.

“I’d say my pros and cons list are about equal,” they said. “I am very thankful for the Rebuild Scholar Program.”

Wilson said he plans to move away from university administration and “work towards leveraging relationships on a national level,” according to Crain’s. He said he plans to take a one year sabbatical to return to ophthalmology and return to WSU in 2024 as a faculty member.

Wilson has faced challenges during his time at WSU including a cheating scandal at the School of Medicine in 2019 and became an outlier among members of the Board of Governors when he failed to tell them about the Detroit Promise Scholarship, according to Crain’s.

Several BOG members spoke out against Wilson in an attempt to remove him from his role as president, but Michigan Attorney Dana Nessel found the vote to fire Wilson was not properly convened.

Bloctom said they hope the next president will create change for students.

“I hope they fight for the students and listen to our needs,” Bloctom said.

In a press release, Board of Governors Chair Mark Gaffney announced the Board will begin searching for a new president in September.

Katherine Stozicki is the News Editor for The South End. She can be reached at newseditortse@gmail.com.