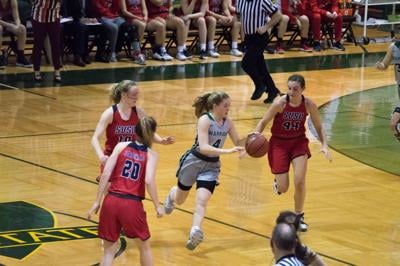 Both teams traded baskets for most of the opening stanza, as there were four lead changes and three ties before the Cardinals ended the quarter by outscoring the Warriors 6-2 to lead 18-14 after the opening period.

The defenses began to impact the game in the second period. Both teams struggled to find a rhythm on offense, punctuated by a stretch where both teams went scoreless for nearly three minutes as the Warriors held on to a 21-20 lead.

Baskets by freshman guard Rebecca Fugate and sophomore forward Kate Sherwood, who combined to score 14 of WSU’s 20 points in the quarter, ignited WSU’s end to the half where they outscored SVSU 8-2 to take a 34-28 lead into the intermission.

WSU went scoreless for nearly three minutes in the third period and saw the Cardinals cut their deficit to 40-33, before a three-pointer by Fugate pushed WSU’s lead back to double-digits.

Fugate and senior guard Alex Matus each scored six points in the quarter as WSU took a 54-40 lead into the final period.

Despite being outscored 24-20 in the final period, WSU’s lead never dipped below 12 points as Sherwood and sophomore forward Grace George combined to score 10 points in the quarter to seal the victory.

“Our bench scoring was very impressive tonight and when you have your three leading scorers in single digits at the end of the game, and you still win, that is really a great team win (and) something to be proud of,” Lohr said.

The trio of Johnson, Chambers and George combined to score 18 points, while WSU’s bench outscored their counterparts 42-8.

Fugate, who scored a career-high 17 points, made four three-pointers and added four assists, said it was exciting to make impactful shots.

“It just felt really good to knock ‘em down because I have practiced quite a bit on my shot,” Fugate said. “It just feels pretty good just making a shot and having your teammates look for you, they set some amazing screens, and it’s nice that they were looking for me.”

The win improved WSU’s record to 10-8 on the season and 4-6 in league play. WSU returns to the Matthaei to face Northwood University Jan.25.