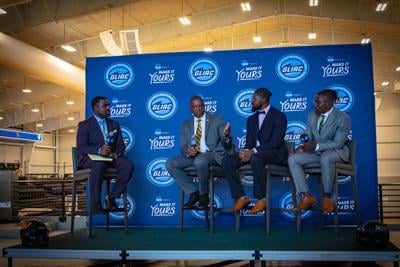 The GLIAC is a collegiate athletic conference that competes at the Division II level of the NCAA. Each program was represented by a coach and two players.

Athletes, coaches and media alike awaited the release of the preseason coaches poll. Due to Ferris State's 31 consecutive win streak against GLIAC opponents, they were selected as the favorite to win the GILAC.

The defending champion Bulldogs received five out of seven first place votes, and Grand Valley ranked second with two first place votes. After a two-win season in 2021, WSU ranked sixth in the preseason poll, ahead of only Davenport.

Winters said his team didn’t need support from the rankings because of the adversity they fought through last season.

“Let’s put it this way, I don’t think they needed that for the motivation. I think the motivation comes from living through what we lived through last year,” Winters said. “You can ask these guys how hard they've worked and why they’ve worked so hard and I think a lot of that has to do with not wanting to be picked next to last in the league.”

Wilkerson, a psychology major, had a memorable 2021 season. Team captain, defensive most valuable player and All-GLIAC First Team were just some of his accolades. Not only did Wilkerson perform on the field, but he stood out in the community and classroom as well.

Along with being named to the GLIAC All-Academic Excellence Team, Wilkerson was selected for the 2021 Allstate American Football Coaches Association Good Works Team.

Wilkerson also received the Randy Guzowski Award, which further recognized him for his leadership and work in the community.

“It means a lot, just being able to affect the community that’s welcomed me so warmly has been great,” Wilkerson said. “Being able to give back with the various organizations that we’ve been volunteering with, not only as a football team, but as an athletic department. Also in the locker room, just to see these guys grow and to be able to affect their lives and have an impact has been amazing.”

Harris, a criminal justice major, had a record breaking redshirt freshman year in 2021.

“My dad always told me ‘You want to make the first guy on the roster and the last guy on the roster feel like they can do something,’” Harris said. “I think the biggest thing is to build their confidence. You have to make them feel as if they can go out there and accomplish it, because one thing about confidence, if you believe that you can do something, most likely you’re going to do it.”

The Warriors kickoff the 2022 season on the road against Slippery Rock on Sept. 3.

Ronnie Martin is the sports editor for The South End. He can be reached at sportstse@gmail.com.