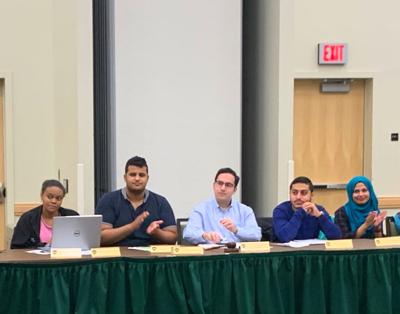 According to Brandy Banks, Title IX director, a WSU study on sexual misconduct showed 7.9% of students were sexually harassed once they started attending WSU, which included on and off-campus experiences.

Banks said the study also showed 26% percent of those who were sexually assaulted were too ashamed or embarrassed to report it. About 47% of the student body knew where to get help.

“It really does take a village. I care very deeply about this place and members of our campus community, especially our students. So, let’s talk about problems,” Banks said.

Since June 2018 Title IX assisted one hundred students and staff members, she said.

Banks said Title IX is in the process of conducting new research with detailed statistics. The results will be published in 2020.

Students and faculty that have experienced sexual misconduct have the option to report it through the Title IX office, to talk to a mandatory reporter or to take the case straight to law enforcement.

A mandatory reporter is a member of staff or faculty who is obligated to report incidents of sexual misconduct 一 if a student reports it to them. Mandatory reporters include academic advisors, professors and custodians. Only employees in WSU’s Counseling and Psychological Services and the Campus Health Center are exempt from being mandatory reporters.

According to WSU’s Title IX office, “Wayne State faculty and staff who know of or have received information about  a sexual misconduct or potential sexual misconduct incident that occurred on campus, in a university program, or at a university-sponsored event, must promptly report that incident to the Title IX Director so that Wayne State can fulfill its institutional obligations.”

Ali Fakih, senator at large, addressed the issue and lack of psychological assistance after survivors have reported it to the IX.

“We also want to make sure we identify any patterns of any individual that may be involved into other Title IX reports or circumstances and may suggest an increased risk at a certain place on campus, or a certain alleged perpetrator committing additional acts of violence in the future,” Banks said.

Other updates at the meeting:

Xenya Burdo is a contributing writer for TSE. She can be reached at gr5344@wayne.edu.