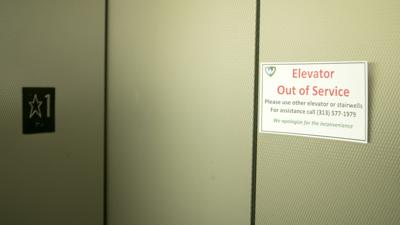 This story originally appeared in The South End's winter 2020 Back to School print edition.

Update: Facilities Planning and Management said elevator assessments will continue for the next three weeks. FPM said the final report will be done June 2020. For the full assessment schedule visit https://facilities.wayne.edu/updates/elevators.

Keeping the elevators running is a “balancing game,” according to Wayne State facilities senior director.

According to the Facilities Planning and Management website, there are 10 buildings with elevator issues on campus. These include State Hall, Alex Manoogian Hall, Old Main, Gordon H. Scott Hall and the Eugene Applebaum College of Pharmacy and Health Sciences.

Pecic, who manages these funds, says this isn’t enough. Replacing an outdated elevator can potentially cost millions of dollars, he said.

“One set of broken elevators can wipe out my entire budget for the year which means nothing else gets fixed,” he said.

FPM has received an independent analysis of its financial situation, Pecic said.

“A more responsible annual allocation to deferred maintenance would be in the range of $65 to $75 million dollars,” Pecic said.

According to Schindler’s website, they manufacture, install, and modernize, elevators, escalators and moving walks throughout North America. On a typical business day, there are two full-time Schindler technicians on campus. This means there are two people responsible for the upkeep of 170 elevators, Pecic said.

Schindler’s policy says as long as one elevator is working in a single building, technicians don’t have to respond to maintenance requests outside of normal business hours, Pecic said.

The proposal states the elevators are 63 years old and are unreliable due to their age. The recommended life cycle of an elevator before replacement is 15 years. Pecic said 20 years is "pushing it."

The BOG approved $2.5 million to refurbish the five elevators in Scott Hall at their Dec. 6 meeting.

Matt Lockwood, director of communications, said the university is doing all it can to get contractors to repair the elevators.

Student Disability Services specialist Ryan Wiseman said for students who aren’t able to get to a classroom on a higher-level floor, broken elevators are a serious inaccessibility issue.

“It’s difficult when buildings have intermittently working elevators where sometimes they’re open or operating and sometimes they’re not,” he said. “It creates barriers in terms of students counting on being able to get to class. They arrive, and they just can’t get to the fourth or fifth floor because of the broken elevators.”

Wiseman said broken elevators create a “domino effect,” where SDS must negotiate classroom attendance policies and switch classrooms to ensure the rooms are in an accessible location.

“So we’re trying to negotiate attendance policies or things of this nature, so students are not penalized for the university’s infrastructure,” he said.

For Wiseman’s personal caseload, he’s had to switch five classrooms so they’re accessible for students with disabilities, and he’s talked to 10 students who are regularly affected by broken elevators.

Moving classrooms around is not a simple task, especially when other buildings are also experiencing unreliable elevators, he said.

“I think the building that comes up the most is Old Main. I know they’re doing a lot of switching of classes there,” Wiseman said. “But when we’re also trying to move classes around and with State Hall (elevators) being closed and there being no classrooms available there, the university doesn’t have a ton of room to move things around.”

Students and faculty members who see gaps in the administration’s response are taking steps to address the broken elevators.

Many have taken the issue to Student Senate. It’s a high priority on the council’s list, Student Senate President Stuart Baum said.

Some Student Senate members are working with faculty union representatives on a “pressure campaign,” said Hayg Oshagan, professor and member of AAUP-AFT Local 6075.

The campaign will take place on social media and utilize the Twitter hashtag #FixTheElevators, a reference to the deferred maintenance department’s policy.

Oshagan criticized the administration’s “number of excuses” for the lack of functional elevators, including unavailable parts and labor. “We just reject that as an explanation,” Oshagan said. “We’re not on some faraway Pacific Island, you know? If you spend money, people will come and fix it.”

The members plan to spearhead the campaign in early 2020, Oshagan said.

The goal of the campaign is to spread additional awareness of the issue and to prompt a response from university officials.

“At the very least, administration should tell us what its plans are and how they want to go forward,” Oshagan said. “We just haven’t heard anything except excuses.”

Baum and others are employing an additional strategy to make it easier for students to report elevator issues.

The council is working with Computing & Information Technology to add a new maintenance request feature to WSU’s app.

“You can take a picture or send in a text that describes a problem, and it goes right to the queue,” Baum said. “So that’s a very user-friendly option.”

C&IT has a long list of projects, and has yet to add the feature to the phone app, said Baum. Like the elevators, the app is waiting on administrators to prioritize it, he said.

Slone Terranella is the editor-in-chief of The South End. She can be reached at editorinchieftse@gmail.com

Cover photo by Jack Thomas. Jack Thomas is a correspondent for The South End. He can be reached at jack.thomas3@wayne.edu