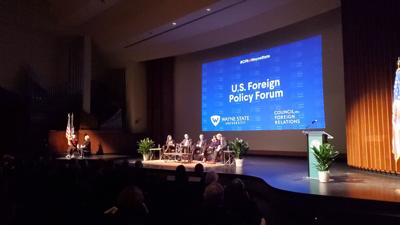 As part of its Election 2020 Series, The Council on Foreign Relations, a self-described nonpartisan think tank, hosted a U.S. foreign policy forum at the Wayne State Community Arts Auditorium on Feb. 24.

According to Wilson, WSU is one of four universities which the CFR is visiting for its Election 2020 Series, and CFR President Richard N. Haass initiated hosting this forum at WSU. Wilson said it is fitting for the forum to be hosted at WSU, given Detroit’s location and diversity.

“Detroit has long embodied the great American melting pot and has welcomed generations of minorities and immigrants. Situated on an international border and serving as a global hub of manufacturing activity, Detroit is very much in tune with global affairs, making it an excellent location for this forum on U.S. foreign policy,” Wilson said.

Front and center in the panel discussion were issues of Russian interference in the 2020 U.S. election, relations with China amid the coronavirus outbreak and as a competitive economy, nuclear arms concerns for Iran and North Korea, concerns of “illegal immigration,” and economic & trade issues facing American workers. The panelists expressed a need to prioritise peace and security through cooperation with allies, and showed support for measures such as sanctions to enforce U.S. foreign policy goals.

Immigration was a major issue for President Donald Trump’s campaign leading up to the 2016 election, and continues to be a significant issue leading into the 2020 election. On the issue of immigration, CFR member and Secretary of Homeland Security under President Obama Jeh Charles Johnson said stemming the flow of “illegal immigrants” at the U.S.-Mexico border can best be achieved by tackling the root of the problem.

“In order to address the problem of illegal migration on our southern border, we simply have to address the underlying causes or the reasons why families in Central America are making the very basic decision to leave Central America, leave this very violent region, and take their chance in Mexico and in the United States,” Johnson said.

The forum ended with audience members posing questions to the panelists. Questions touched on international trade and security issues, and human rights as it relates to the US role in civilian casualties abroad and US involvement in foreign nations’ affairs.

CFR member and National Security Advisor under President George W. Bush Stephen J. Hadley said holding this forum on a college campus is significant because youth have a significant role to play in shaping our nation’s future.

“The future of this country is really the future of today’s young people, not today’s old people like me, and one of the messages I try to send when I speak to audiences of young people is to say that the future is yours, the future is going to affect you, and it is time for you to step up and try to shape that future and he best way to do that is to get involved in politics, and for goodness sake, vote,” Hadley said.

The primaries are on March 10 in Michigan.

Cover photo by Jenna Prestininzi. Jenna is a correspondent for The South End. She can be reached at jennap@wayne.edu