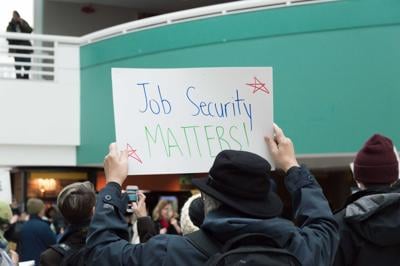 Wayne State and the AAUP-AFT Local 6075 union reached a tentative agreement on a new three-year contract on Sept. 13.

The union ratified the contract Sept. 21, following several days of voting, Aubert said in a Sept. 22 email to TSE. There were 736 votes cast, with 714 in favor of ratification and 22 against.

“The new contract applies to the relationship between the university administration and those represented by the union (all faculty holding at least a 50% position at Wayne State and academic staff),” said Margaret E. Winters, chief negotiator and professor emerita in French and Linguistics, in a Sept. 27 email to TSE.

AAUP-AFT Local 6075 began preparing for contract negotiations over a year and a half ago.

The union sent the WSU administration a statement of intent to begin negotiations in December 2020, Winters said. Negotiations began in January, as the previous contract was set to expire in March, Aubert said.

Winters said negotiating parties “worked hard to present and defend their proposals at all bargaining sessions, but always in an extremely professional and respectful tone.”

The previous contract was drafted in March 2013, Aubert said. Winters said eight years is longer than a contract usually lasts.

“Between changes in law, technology, the university, and general culture, a lot has happened over the last eight year(s) leading to more discussion and bargaining than before,” Winters said.

The proposed contract “would have amounted to an effective cut in take home pay for many members of the AAUP-AFT 6075,” Aubert said.

“For the university to come out with such an outrageous proposal from the get go I think is telling in how they view their workers,” Cole said.

After additional negotiations over copay limits, the union called a solidarity rally for Sept. 17, Aubert said.

“We wanted to show that members of AAUP-AFT 6075 stood with the bargaining team and were united in our demands for fair compensation and healthcare,” Aubert said. “We wanted to fight hard on healthcare costs because it would impact so many workers on campus.”

The YDSA “immediately went around the main campus and flyered almost every building with their poster and ours,” Cole said.

The event was then canceled due to the tentative agreement, according to a Sept. 13 Tweet from the union.

Winters said the planned rally had no impact on timing of the negotiation process.

“We were very close to completing negotiations even in the week before the (Sept.) 13, so the rally did not affect the teams at the bargaining table,” Winters said.

Negotiators went through each article of the final contract proposal individually, Aubert said.

“They (the bargaining team and the administration) didn’t change every single article, but they changed a lot of them,” Aubert said. “Each side would cross out some parts, add the changes they wanted to see and send it to the other side. Then the process would continue and both sides would continue crossing out, adding and sending the change back until they reached a ‘tentative agreement.’”

New benefits for families include a $160,000 childcare subsidy and extension of paid parental leave from eight to 12 weeks, according to contract highlights provided by Aubert.

Titles of lecturer and senior lecturer will be changed to the non-tenure-track titles of assistant professor, associate professor or professor, Winters said. There will be opportunities to apply for promotion within these ranks.

“The bargaining teams worked hard to understand and solve the problems which gave rise to the proposals at the table,” Winters said. “In some cases, even if some proposal did not end up in the final contract, other ways were found to solve or at least work toward a solution for the underlying interest or concern on either side.”

Aubert said there are still issues to be resolved, especially as WSU comes out of the COVID-19 pandemic.

“We take on extra students, offer tech support, clean shared spaces, pick up clerical work. But we cannot take any more deep cuts,” Aubert said. “We need the university administration to address understaffing, and start filling vacancies, so we can meet the needs of our students and do the work we were hired to do.”

Cole said WSU faculty, staff and students are “intertwined in a symbiotic relationship.”

“If custodial and maintenance staff are underpaid, overworked and have positions cut, then that translates to a worse environment for students in dorms and around campus,” Cole said.

Natalie Davies is a contributing writer for The South End. She can be reached at hg9482@wayne.edu.

Cover photo of a person holding a sign in support of WSU lecturers at a rally on Feb. 26, 2020. The photo was taken by Jonathan Deschaine. He can be reached at jonathan.deschaine@gmail.com.