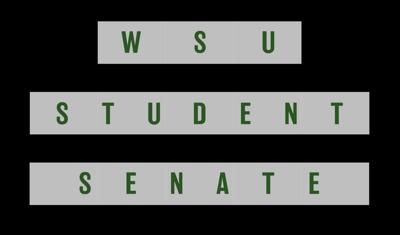 School of Social Work Representative Rajan Varmon introduced an amendment to the meeting schedule to discuss the email, which passed unanimously.

After the amendment passed, Varmon provided an update on feedback he received from within the WSU School of Social Work regarding Senate’s statement on Palestine.

“Some members of the School of Social Work reached out to me regarding the email because they were confused by some of the statements the president made,” Varmon said. “One statement in question was the inflammatory wording of it. The members saw the post and informed me that they didn't see that. One thought it was inclusive and clear. Another thought it denounced Islamophobia and antisemitism and they aren't sure why he needed to say that specifically.”

Lukis Bagdon, College of Education representative, said they didn't think Senate should discuss the email without hearing from Wilson directly.

“I agree that it (Wilson’s email) is incredibly confusing and vague in a way that is bothersome,” Bagdon said. “However, I don't know how much us talking about it will lead to any sort of resolution because President Wilson isn't here to explain why certain wording was used.”

“I understand what he (Wilson) was saying,” Crump said. “I think a lot of it was inflammatory, unnecessary and we didn't solve anything. I said that on that day and I'm still saying it now. We could have put a much less divisive statement out.”

Crump said Senate should begin requiring a two-thirds vote to pass such statements in the future, due to negative feedback he received about the statement.

“We got a lot more likes and follows after he (Wilson) sent his email,” Whitlock said. “A lot more people were aware and I've received nothing but mostly positive comments. Even though I don't agree with what he put out, I think it helped us reach out to students that have been struggling.”

Bagdon later said they disagreed with using a two-thirds system to pass a statement because it may affect Senate's ability to act quickly.

"50% plus one is good enough to confirm a Supreme Court nominee, I think it should definitely be enough for the Student Senate,” Bagdon said. “I think using a two-thirds vote would make doing anything much harder and would create more roadblocks.”

Senator at Large Zack Thomas said that although he agreed with Crump and Wilson, he did not think using a two-thirds vote would be helpful.

“I think you only need to look at the comments of the Facebook live from the last time and see what we brought to campus,” Thomas said. “There's 500 comments and it's mostly our own students fighting each other, we caused that. However, we shouldn't modify our bylaws to create a two-thirds vote. I think that would tie our hands.”

A motion to end discussion on Wilson’s email was approved unanimously. Senate did not vote on modifying its bylaws to create a two-thirds vote for statements.

Katie Rawlings, associate director of New Student Orientation, also presented WSU’s plans for orientation this year and in the future. Rawlings said all 2021 WSU Orientation Part One activities will be online and attendance will be mandatory for incoming students.

WSU is considering using a hybrid format for orientation in coming years, she said.

“It could look like we’ll offer virtual programs and in-person programs,” Rawlings said. “They will cover similar material but they might look very different. It will mean for us that we can reach international and overseas students much earlier.”

WSU Student Senate will hold its next virtual meeting on June 17 at 6 p.m.