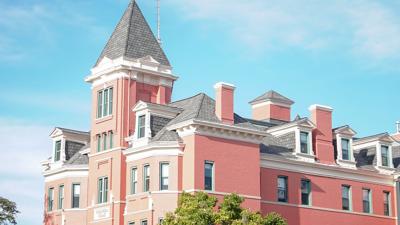 The Thompson House, a campus residence hall for College of Fine, Performing and Communication Arts students, has reopened for the 2021-22 academic year.

The Thompson did not open in the fall 2020 semester due to the COVID-19 pandemic, said CFPCA Success Coach Erin Wiseman.

“A decision was made as housing was evaluating their areas and it was kind of based on the community aspect of (The) Thompson,” Wiseman said. “We thought it was best for students.”

The Thompson has common spaces for residents, including creative common rooms, a community room, community kitchens and bathrooms, according to its website.

Students placed in The Thompson for the fall 2020 semester were able to move to other campus housing or cancel their housing agreement, Wiseman said. Students in the CFPCA Creative Warriors Living Learning Community were transferred to Leon H. Atchison Hall.

Incoming first-year residents at The Thompson are required to be members of the Creative Warriors LLC, according to its website. Living learning communities are designed to promote academic and social success on campus, according to the Office of Housing & Residential Life.

Senior ceramics major Dexter Dewyer has been a part of the Creative Warriors LLC for four years, she said.

“I didn’t know anything about Creative Warriors (LLC). My sister told me that this would be good for me, so I did it,” Dewyer said. “I think it’s a good combination to have fun with people in your major and to live in a building where people can help you.”

Freshman photography major Brandon Russell said living in The Thompson helped him connect with his peers.

“I definitely do enjoy living in The Thompson with Creative Warriors (LLC) because they (Creative Warriors) have a different mindset on things as they’re all in the arts,” Russell said.

The Thompson has a number of resources available to residents, Wiseman said.

“On the first floor there’s a collaborative space that has strong floors, so dancers can practice there, in the basement there’s a media lab that’s loaded with programs they’ll need for their classes, and there’s just a lot of unique spaces in there that allow students to do their work,” Wiseman said.

Russell said that there’s a common ground among residents that makes him feel supported.

“If I’m struggling with not being inspired with music they’ll understand,” he said.

Wiseman said The Thompson reopening was a positive development for CFPCA students.

“We were really excited to get students in there and allow them to have that space and be in that community again,” Wiseman said.

Russell said he appreciates his experience living in The Thompson this semester.

“Being around so many creatives is something that I definitely enjoy and I hope to continue that in the future as well,” Russell said.

Wiseman said The Thompson is valuable for connection among CFPCA student residents.

“Living learning communities are a great opportunity to meet students who have similar interests to  them, and have the ability to attend events,” Wiseman said. “The Thompson re-opened for students and will continue to help drive student success.”