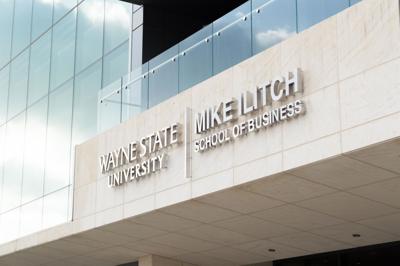 Students at Jackson College are now able to pursue a bachelor’s degree in business from the Mike Ilitch School of Business.

Students can take WSU classes at Jackson's central campus and have the option to transfer to WSU from Jackson.

The partnership was strengthened with a ribbon cutting ceremony at Jackson’s central campus Jan. 14.

Throughout the process, there were several factors to consider, said Cynthia Allen, vice president of talent and administration.

"I and the dean have made a few trips to WSU to look at logistics, timeframes, what would be the best programs to start with," Allen said.

Allen said working out the details of this partnership involved work at Jackson and WSU on her part.  Jackson funded the construction of the WSU office.

Allen said having other universities present at the Jackson campus will be helpful to students.

“If we have partners here they can take classes and feel comfortable on our campus,” Allen said.

Jackson currently has an on campus partnership with Siena Heights University in Adrian, Michigan, according to Allen.

WSU currently has several partnerships with other colleges, mainly in Wayne, Oakland and Macomb counties, according to WSU Marketing and Communications Manager Carol Baldwin.

Baldwin said the collaboration was initiated by Jackson due to mutual goals between the two colleges.

“Jackson College wanted to partner with a four-year, public institution, and approached WSU because we share the same commitment to higher education, values and student success. We were thrilled to have this opportunity to partner with Jackson,” Baldwin said.

Two classes will be taught in the upcoming spring and summer semester. These classes include Business Administration 1500 and Management 5530.

To be eligible to enroll, students must apply to WSU using the online application. They will then be able to browse and register for classes online.

Business administration and marketing student at Jackson, Gonzalo Bocaz, said he heard about this partnership through social media. Bocaz said he sees this development as a positive one for the college.

“I feel (like) it’s a wonderful idea to have access to WSU on campus,” Bocaz said. “Personally, I prefer to meet people face to face instead of talking to them via phone or email, so I feel it’s a really good idea to have an office on campus.”

Allen said Jackson is motivated to enhance their students' educational experience by pursuing this partnership.

"Our students are our number one priority (and) we're just trying to give as many opportunities as we can to students in this area," Allen said.

Baldwin said there are several benefits of this partnership to Jackson students, on their own campus and at WSU’s campus.

“With this partnership, Jackson students will be able to complete an affordable four-year business degree from the convenience of their own community. They also will have the opportunity to participate in internships in and around our Detroit campus, so they get the best of both worlds,” Baldwin said.

Jackson students will be able to transfer up to 82 credits to WSU by following the business school’s articulation agreement in place between WSU and Jackson.

Prospective students can stop by WSU’s office at the Jackson College central campus for more information.

Jenna Prestininzi is a contributing writer for The South End.