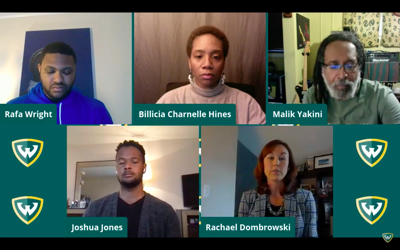 The Juneteenth Planning Committee held a virtual event on food insecurity and its roots in white supremacy Tuesday. The panel featured members of various organizations across Detroit tackling this issue.

As the planning committee prepares for a large celebration during the week of Juneteenth this summer, the holiday is being celebrated throughout the year with various events and conversations, said Billicia Charnelle Hines, associate professor and committee member.

One of the committee's goals is “to get more informed about what’s going on in the community in respect to the African American community and our needs and this is one of them… food justice,” Hines said.

"Because (the food system) is rooted in the theft of the land and the dispossession of the Indigenous population, the enslaved labor of Africans to build much of the food system, so on and so forth,” Yakini said.

Inequities regarding food can be seen throughout communities and stores, said Raphael Wright, founder of Neighborhood Grocery.

“There is a social consequence of this white supremacy foundation as it pertains to food security. When good healthy food was taken out of communities due to the fact that outsiders only control the food outlets that are of a health variety, so much bad food infiltrated communities as well. And there’s health consequences to that,” Wright said.

Through community-based crowdfunding, Wright said he is developing the new grocery store in a former liquor store on the east side of Detroit. The project will also include a half-acre farm, establishing a market and growing produce for the store.

While Detroit’s population is 80% Black, none of the independent grocery stores in the city are Black-owned, Yakini said. This is in part due to the lingering effects of racist policies that disempowered Black communities by making it more difficult to start businesses.

Organizations like DBCFSN are finding ways to uplift communities and address food insecurity simultaneously. The network runs the city’s largest farm, many youth programs, and is developing the Detroit Food Commons that will house the Detroit People's Food Co-op, Yakini said.

“(The Detroit People's Food Co-op) is owned by member owners who actually shop at the store,” Yakini said. “And so this is a tool that African Americans have historically used to galvanize our collective wealth and power in the face of an economic system, which is hell bent on keeping us out of the mainstream economy.”

While anyone can shop at the co-op, member owners have the opportunity to run for their board of directors, elect directors and receive a share of profits when the store does well, Yakini said.

“We think that’s an important model that we need to look at and kind of move beyond just this individual ownership model that we often hear about,” Yakini said.

According to the College and University Food Bank Alliance, 75% of students who receive financial aid are food insecure. At Wayne State, the W Food Pantry opened in 2017 as a resource for students who may be facing food insecurity, Coordinator of Student Life Wellness Rainesha Williams Fox said.

A nutrition and food science student, along with the recent edition of a dietician to the team, have created menus to give students meal ideas they can make with food from the pantry, Williams Fox said.

Students who are experiencing food insecurity are most likely facing other insecurities in their life, Williams Fox said.

“If you're already deciding whether you should buy your textbooks or buy food, that's a problem. And so, we've expanded our services from not just food,” Williams Fox said.

The pantry has stepped up to provide more items besides food —such as hygiene products—for students along with other needed services, Williams Fox said. Through a partnership with the Office of Economic Development, 31-day DART passes give students access to DDOT and SMART busses and the QLINE. The pantry also provided Wi-Fi hotspots to students who needed internet for online learning.

“A lot of students were not able to enroll in classes or be successful in classes because they did not have proper Wi-Fi or they’re sharing Wi-Fi with three other, four other people in their house," Williams Fox said.

“It's so important that everybody knows this information, because that knowledge that you are giving, that is what's going to give us power, because not knowing it, you're just resigned to go to McDonald's every day, like many people do, and think that's all cool,” Hines said. “But now we know, okay there's a new grocery store. I'm going over on the east side and you know, go to this new Black grocery store and get my food instead of this other grocery store or like I'm gonna look into policy.”