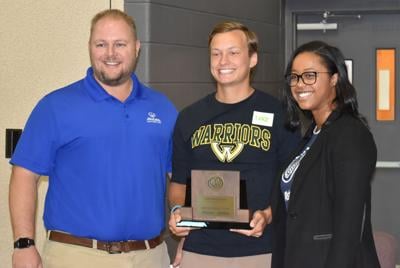 Many Wayne State football players walk onto Tom Adams Field and create memories on the field for years to come. But for redshirt senior kicker Luke Bevilacqua, he has lasting memories off the field.

Last month. Bevilacqua was one of 23 players recognized at halftime of the Sugar Bowl for being named to the American Football Coaches Association Good Works Team.

Bevilacqua received the honor for donating bone marrow that saved the life of a stranger.

He said it was strange to receive the amount of attention he got for what he did.

“It’s nice to be recognized for the things you do but it was kind of weird,” Bevilacqua said. “The way I see it, I put myself out there to help someone and I could save someone’s life. It’s a basic human thing.”

In 2018, WSU football created an initiative that encouraged players to be on stand-by if their bone marrow was a potential match to save a life.

Last year, Bevilacqua received a call that he was the perfect match for a transplant to save the life of a 61-year-old woman.

After taking some time to contemplate his decision, Bevilacqua decided to go through with the procedure.

Using a blood transfusion machine to draw out white blood cells or a surgical procedure where needles are used to draw the liquid bone marrow from inside the bone were the two ways that doctors could approach the surgery.

However, the operation depends on what the patient needs. The woman required the surgical procedure and Bevilacqua agreed to it.

Despite the prospect of having surgery for the first time in his life, Bevilacqua said he couldn’t turn down someone in need.

“I talked with my family, my girlfriend and decided that someone’s life was depending on it (and) I could help save them,” Bevilacqua said.

On May 1, 2019 Bevilacqua completed the procedure at the University of Michigan’s CS Mott Children’s Hospital in Ann Arbor.

During the procedure, doctors removed a liter and a half of Bevilacqua’s bone marrow.

Despite initial reports, Bevilacqua said he was never given information about the woman he saved or spoke to her.

Due to confidentiality reasons, Bevilacqua and the woman won’t be allowed to talk to each other until May.

As he enters his final season with the football team, Bevilacqua says his intense schedule suits him perfectly.

“I’ve always been a busy person, doing lots of things at once and running here or there, I don’t think I could live at a slow pace,” Bevilacqua said. “

On the field, Bevilacqua said he hopes to be a better player and go out on a better note than the one he came in on.

While he doesn’t know what industry he’s going to go into, Bevilacqua, who majors in global supply chain management, hopes to continue to have a positive impact.

“Really, I just want to be able to make an impact in the community, be able to support people and give back.” Bevilacqua said.

Irving Mejia-Hilario is the sports correspondent for The South End. He can be reached at ismejia48@wayne.edu