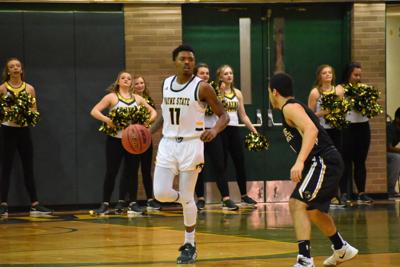 Wayne State University men's basketball split their series at Lake Superior State University to start the season. WSU won its first matchup 87-76 on Jan. 8, but lost its second game 75-64 on Jan. 9 at the Ronald "Bud" Cooper Gymnasium at LSSU.

For WSU, their win on Friday marks the first time they came out victorious at LSSU since 2012. The game also marked the first time WSU has played since Feb. 27, 2020. Players have had limited time to condition their bodies to play a full game, and it showed by Saturday's game.

“We’re out of shape and certainly not ready to play a basketball game —so we were looking rag tag out there. This was the first time we had 10 guys go up and down the floor since we started practice, so that’s going to take a while,” Greer said.

One of the biggest storylines heading into this season is the return of junior guard Darian Owens-White. Owens-White, a former Second Team All-Great Lakes Intercollegiate Athletics Conference caliber player, played an inconsistent series against LSSU this past weekend.

In WSU’s win on Friday, Owens-White scored 23 points but shot 8-27. In WSU’s loss on Saturday, his shooting struggles continued, as he only scored 12 points on 3-17 shooting.

Freshman guard Ray Williams Jr. also had an exciting weekend. In his debut game on Friday, he provided a spark off the bench and scored 14 points efficiently with 6-8 shooting.

However, that spark was nowhere to be found on Saturday. Williams was held to only five points off a 1-6 shooting performance.

Despite an impressive team showing for most of the game on Friday, foul troubles hindered WSU halfway through the second half, leading to an 11-0 LSSU run. Fortunately, WSU managed to pull off a 15-7 run of their own to end the game.

Greer, now in his 20th season, said fouling from his team in the series was inexcusable.

“Getting technicals is unacceptable. We don’t teach talking back to officials and that’s something we’ll talk about in practice,” Greer said.

Being one of the leading scorers in Friday's win with 14 points off 4-7 shooting with five assists, Saturday proved to be a much different story for Neely, the former All-GLIAC First Team star. He scored three points in Saturday's loss.

Greer said he believed some of Neely’s shooting woes could be due to the insertion of Owens-White back in the starting lineup.

“He was just terrible today. Defensively, he was out of position and got a lot of tick tack fouls. But I think a lot of it is that Darien [Owens-White] is trying to find his way back,” Greer said. “Darien took a lot of shots and I think Braylen found himself just standing around, watching.”

With the first two games of the season in the books, Greer said he looked forward to having material he can study with his team going forward.

“The biggest point is, we’ll have some tape. Until you can see yourself on tape, you can’t see your mistakes. Hopefully, we can get a couple of good days of practice and be ready to compete at home,” Greer said.

WSU men’s basketball will return to the Matthaei Center on Jan. 15 and Jan. 16 for their series against Davenport University.