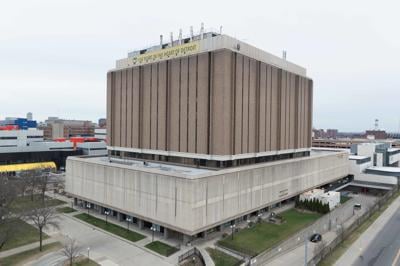 He served as assistant dean at the Wayne State School of Medicine since 2005, but he was informed October 2019 his position would be eliminated and be given a new title. He interviewed for the position, but didn't hear back.

Matt Jackson lost his role as dean of basic sciences in January 2020, after the administration eliminated his position, he said.

He previously served in that role for 15 years, beginning in 2005.

Jackson now works solely as an associate professor of biology, microbiology and immunology — where he’s tenured.

The school is currently seeking candidates for a new position: associate dean of pre-clerkship curriculum and foundational sciences. This will replace the basic science assistant dean job in order to meet the “expanded role, expertise, and responsibilities,” that come with the SOM’s new curriculum, according to university spokesperson Matt Lockwood.

“A dean for basic sciences is actually an anachronism,” Baker said. “So this is just a recognition of a bigger job, and a different job actually consistent with best practices.”

A committee, including faculty members and students, is conducting a nationwide search for a suitable candidate, according to a SOM announcement.

The committee is considering four candidates, including one who is already employed by the university, Baker said. The job is posted to the university’s online hiring system, with a detailed description.

Jackson was among the candidates interviewed for the job, he said.

“If you look at the job description, it's my job,” Jackson said. “It's what I was doing. It's basically my performance evaluation. It's things that I created 15 years ago.”

A group of course directors drafted a letter of support, recommending Jackson for the position. The letter praises his “relentless work to transform the curriculum from course-based to system-based.” However, the letter was unsigned. He provided the document to The South End, omitting the author’s name.

While Jackson was assistant dean, the SOM faced the threat of losing its accreditation. In 2015, the Liaison Committee on Medical Education put the school on academic probation. The LCME cited 12 violations including a lack of diversity in its student body, The South End previously reported.

One violation in particular affected Jackson’s department: LCME surveyors found that the curriculum had “little variety” in its testing, beyond multiple choice exams. As a result, Jackson made big modifications, he said.

“We introduced a lot of self-directed learning where students had to just work on projects themselves, or they had to do problem-based learning narrative assessments,” said Jackson. “(LCME) was satisfied with those changes.”

During the probation period, the university hired Baker, in part to address the violations, according to a SOM statement. The LCME restored full accreditation in 2017, according to the SOM.

In its assessment of the university, LCME drew attention to the school’s hiring practices, Baker said. The surveyors found that the university searched for most of its administrators internally. This is why the school chose to expand its search, according to Baker.

“They said that we were too insular, we never looked outside” Baker said. “We still encourage internal candidates because many times those are the best candidates. They even have a little advantage because they can showcase what they've done already.”

Baker informed Jackson that his position as assistant dean would be eliminated in Oct. 2019, Jackson said. Baker gave him choices, which included an associate dean recruiting position or an administrative position in the graduate program.

“There was no explanation why,” Jackson said.

Following their conversation, Baker sent Dean Jack Sobel a new contract for Jackson, which said his position expired on Dec. 31 2019. This wasn’t a typical contract, which puzzled Sobel, according to Jackson.

“Usually, your administrative contract goes for a year,” said Jackson. “And most of our positions, we have a face appointment in the department, and then you get asked to do this administrative job.”

Shortly after, SOM faculty received an announcement, which described the new associate position, and thanked Jackson for his years of service.

“I never knew that was coming out,” said Jackson. “It just all of the sudden popped up.”

Jackson said he later found out there was no open administrative position in the graduate program. Baker doesn’t have the authority to make decisions in that department, he said.

“I think there could be real opportunities in graduate school going forward,” Baker said.  “But I’m not in control of any of that.”

“It's very scary to some people, to a lot of people. Even for Matt because Matt's been in that job for 15 years,” Baker said. “Change is very difficult for everybody. And it's uncomfortable, you know, until you get to the point where things feel good.”