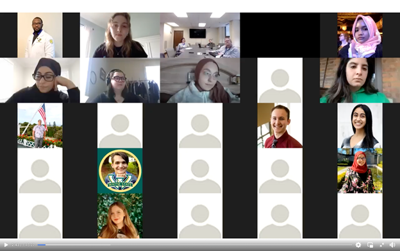 The meeting was scheduled to be in-person in Student Center Room Hilberry AB, but Senate notified The South End Thursday evening that the meeting would be moved to a virtual format. No public announcement of the change was made on Senate’s Facebook or Instagram.

The meeting was not livestreamed and the recording was uploaded to Senate’s Facebook page on Sunday night. TSE could not report on the entirety of the meeting, as the recording uploaded was incomplete.

College of Education Representative Lukis Bagdon and Senator at Large Tony DiMeglio proposed the resolution on gender-affirming clothing, which would include the purchase of $849.79 worth of binders, gaffs and packers.

“Dysphoria can cause people to self-isolate, which means they miss class, skip important life events, etc,” they said. “Anxiety, depression, rates of self harm and suicide attempts increase as dysphoria overwhelms a transgender person.”

Bagdon and DiMeglio said they read reviews and spoke with transgender students in order to determine the brands of products to buy. They plan to start by purchasing a small number of items.

“We just went with one of each sizing for the tuckers, (packers) and gaffs, and then multiple of the binders because those are typically used by more individuals,” DiMeglio said.

Bagdon said it is important for the Warrior Wardrobe to provide gender-affirming clothing.

“Gender-affirming care is suicide prevention and necessary to the quality of life of transgender people,” Bagdon said.

Director of Public Relations Kelly Whitlock proposed a resolution to purchase over $800 worth of  41 popular board games for the Game Room in the Student Center basement.

Dean of Students David Strauss said he met with Whitlock previously and gave her his approval of the project. He also spoke with Student Center Associate Director Katie Beaulieu and has her full support.

Several senators debated Whitlock’s proposal because her proposed list of board games had a cost of $894.64.

Secretary Nasrin Nesha proposed that the Campus Activities Team, which currently shares its collection of board games with Senate, move them from its office to the Game Room. This would be an alternative to purchasing new board games.

DiMeglio said he was in favor of Whitlock’s proposal because Senate has $17,000 in excess funds remaining in its account. This does not include funding that was allocated to the Urban Gardening Initiative at Senate’s March 24 meeting.

Whitlock motioned to approve the total purchase of the board games, Senate conducted a voice vote and the motion failed.

Whitlock then motioned to allocate $500 to the project, which passed unanimously.

The Office of the Registrar gave an update on upgrades to its transcript processing service.

Kruschinska said the current transcript production system requires all work to be done manually by one full-time WSU employee.

The new system will include a fee for transcripts, starting at $2.25, Kruschinska said. This is cheaper than other local universities because WSU will not be taking any revenue from the fee.

Senator at Large Amina Khalique gave an update on Senate’s Menstrual Product Pilot Program, which provides free pads and tampons in first-floor restrooms in State Hall, the Student Center and the Undergraduate Library.

Khalique said Senate saw overwhelming positive feedback on a Nov. 16, 2021 survey to the campus community on the pilot program.

She has been working closely with Facilities Planning and Management and was able to gather insights on the initiative from them, she said.

“The larger buildings, such as UGL and the Student Center, have higher traffic and there was a higher need in those areas,” she said. “Because there was a higher need, the dispensers cleared out very quickly and he said they are working on better training for custodians to make sure these products are stocked more frequently.”

Khalique said she is looking to make this a permanent initiative on campus, starting by expanding to the first-floor women’s restrooms in Old Main, General Lectures and the Helen L. DeRoy Auditorium in May.

Beginning in 2023, the initiative would expand to at least one additional building each year until its goals are reached, Khalique said. FPM indicated that this is feasible.

Student Senate’s last meeting of the semester will be held April 21 at 6 p.m. in Student Center Room 010.

Amelia Benavides-Colón is the news editor for The South End. She can be reached at hd4634@wayne.edu.