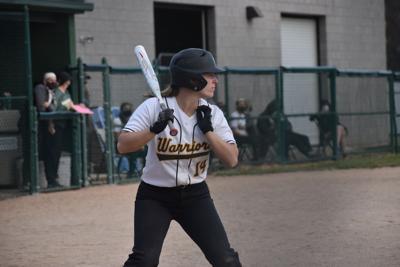 Since getting off to a strong 7-0 start, the Wayne State softball team has found different levels of success within GLIAC. In conference play, WSU has gone 8-10 and has lost five of its last six games.

In addition to what has been a season with mixed results, COVID-19 continues to be a factor in WSU Athletics. The softball team had its April 10 matchup with Cedarville University canceled and its April 17 series against Purdue University Northwest postponed due to the COVID-19 pandemic.

Senior second baseman Rainey Psenicka said it has been challenging to maintain focus due to COVID-19. Still, she and the team continue to remain motivated to finish the season strong.

"Going into the season, we kind of knew things might change day by day, but we need to be on our toes all season and be ready for anything that can happen,” Psenicka said. “It's important to come to practice every day like it's going to be our last practice and play like every day could be our last game.”

Senior third baseman Rose Myers said she has learned to adapt and change her mindset amidst this unique time in sports.

"This has definitely been an added stressor this year that I'm sure many of my teammates have taken for granted in the past,” Myers said. “I have been learning to play in the moment and be present and grateful for every second I get to spend on the field instead of worrying about previous games, future games, statistics, etc.”

In his 40th season at the helm, Bryce announced his retirement on Feb. 16.

Psenicka said the team is motivated to send Bryce out on a high note.

"We want to win every season, but more now especially knowing how much time and basically Gary's whole life has been put into Wayne State softball,” Psenicka said. “The big thing for us this year is obviously to win but definitely to go out on a positive note for our coach."

Bryce said he understands how difficult GLIAC is in any season, but he believes this team is one of the conference's best.

"I don't think there's one team in this league that isn't capable of beating everybody. You see the standings and there are so many splits. So, I think everyone's pretty much a top contender for everyone to be playing against,” Bryce said. “But I would consider us to be in the top four teams in the league right now.”

Though WSU may not compete in NCAA tournaments, the team remains motivated to succeed, Myers said.

“We do not expect to be ranked regionally especially since we were not able to play against more in-region teams in Florida and Chicago tournaments,” Myers said. “With that being said, our focus is to play hard and win as many games as possible so we can put ourselves in the best position going into the GLIAC Tournament with the goal of winning the tournament.”

Psenicka said she thinks WSU’s prior experience in NCAA tournaments gives the team a better chance to compete in the GLIAC Conference Tournament starting on May 11.

"There's a lot of experienced players on our team that have been to an NCAA Tournament before so we kind of know what that's all about. It's gonna be a challenge for sure, but I think our team has a good shot at it," Psenicka said.

Myers said WSU may be going into its toughest stretch of games near the end of the season. However, she said she believes her team will step up to the plate.

“This upcoming weekend is our toughest series as we face Grand Valley, who has been leading the GLIAC the last few years and have always been strong competitors,” she said. “The next day we play against Northwood, who has proven to be a tough competitor this year as well, but I believe we are ready to rise to the occasion and come to compete.”

On April 24, WSU will have the home-field advantage for its double-header as the team takes on #14 Grand Valley State University, the top team in GLIAC, at the Gary L. Bryce Field.