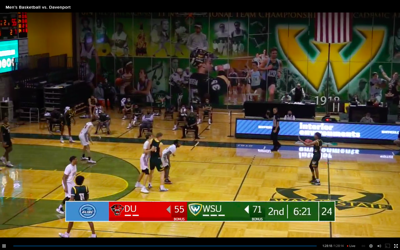 Sixty-five cardboard cutout fans were sold in the span of two weeks, though only 25 arrived on time to attend Friday and Saturday’s games, WSU Assistant Athletics Director for Marketing Maggie Myers said. Attendance last year averaged 665 people per double header and about 600 people logged on to stream games this weekend.

WSU got a taste of playing in an empty gymnasium during their series at Lake Superior State University. Another adjustment this season, due to Great Lakes Intercollegiate Athletics Conference COVID-19 protocols, is playing the same team in the span of 24 hours, Head Coach David Greer said.

“(Y)ou got to bring your own energy and, it's a little weird, you’re playing the same team back to back with the same referee. So, it's almost like an 80 minute game there,” Greer said. “But I thought our guys competed hard this week. With a limited schedule, winning at home is gonna be at a premium so I thought our guys did a good job coming out and defended on court.”

Both games featured strong individual and team performances from WSU.

WSU went 25-30 in free throws made, with Neely and Owens White each scoring 10 free throws in the game.

“Both those guys are excellent free throw shooters and they’re going to shoot a lot of free throws. So hopefully, we can get the other team in foul trouble with their dribble penetration and their quickness,” Greer said.

“I just knew I had it going when I made my first two shots. I just had to stay in game rhythm: just keep going, not giving up, not letting up, keeping the intensity up,” Marshall said.

Due to no fans in the stands, Marshall said there’s a lot more energy being generated by Warriors from the bench.

“Like I say we just were just chomping at the bit to get back to practice and try to get a little bit better, but, again, a big week for us and we just got to be ready for the challenge,” Greer said.

WSU will face off against Northwood University at Ripema Arena in Midland, Mich. on Friday, Jan. 22 and Saturday, Jan. 23.