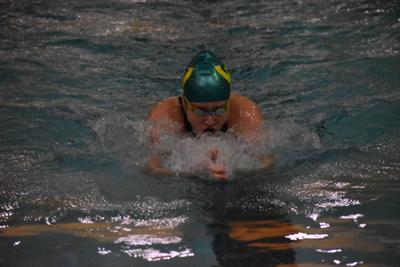 The Wayne State University men's and women's swimming teams wrapped up their annual appearance at the Great Lakes Intercollegiate Athletic Conference Championship on Feb. 20 at the Holland Community Aquatic Center. The men finished second with 728.5 points, and the women finished third with 579 points.

Limited training time and COVID-19 concerns have left WSU in a rather odd and uncertain position. In his 24th season, Head Coach Sean Peters said this season has been unlike any other.

"It's been extremely different and it's been a challenge. This is a sport where you need to have a certain amount of training and preparation for it. This year, with the governor’s order, false positives and a ton of other things, we've just had a lot of new things to deal with," Peters said.

In preparation for the GLIAC Championship, Peters said he knew this season would be particularly challenging, but his motive was to make the best of their situation.

"The biggest thing we're trying to do is recognize what we can't do. We can't turn back the clock and we absolutely cannot breach any protocols to get ahead on training. We don't have the time we used to have, but we've been given directives and we have to make the most out of what we have," Peters said.

Over the course of the four days at the GLIAC Championship, despite a lack of time to mesh together with the team, there were several impressive performances from freshmen.

Peters said he was impressed with his freshmen's performances and these showings will help his swimmers gain the confidence they need to be better down the road.

"I think the future is bright. I think now they have a certain confidence in themselves and a belief that they're capable of doing whatever they can do. Some other programs that we were competing against had it better and worse than us, but these particular athletes still found a way to compete at such a high level," Peters said.

Peters said he hopes to see seniors like Koh and Groteler come back for another season due to the shortened season.

"There's a chance that some seniors return because of how much we've had to sacrifice this year. We're basically talking about a two-week season. They were great, and I can only hope to see them come back next year," Peters said.

For the men, junior Franz Mueller and sophomore Luka Cvetko presented some of the week's biggest standout performances. In the 50 freestyle, Cvetko came in first with a time of 19.81, and Mueller was second with his time of 20.02.

In the 100 freestyle, it was a familiar sight. Mueller pulled in yet another victory for WSU with a time of 43.95, and Cvetko finished second with his time of 44.10.

Peters said he respects Mueller for how much he has endured this year, working through school, dealing with personal issues and still giving it everything he had.

"Oh my goodness, he was dealing with so many things this year. Yet, he still came through for us and for himself. In spite of the many hardships, he was able to turn his swimming into the next level and it was great to see," Peters said.

Diving was a more difficult task for WSU this year. Due to some injuries and a false positive COVID-19 test, many male divers were unable to compete. However, the women were still able to compete, and Peters said he felt good about their performances.

"You got a diver like (senior) Amanda Hurchalla, who has been a great diver for years. She was able to get the top eight in both boards. (Freshman) Alex Brent was dealing with an injury but he managed to get cleared and he also got second on the boards," Peters said.

The NCAA Championships field has been reduced by 25% due to COVID-19 restrictions, but Peters said he has a good idea who might make it into the limited field.

"I think it's difficult to predict who is going to end up where, but as of right now, I feel best about swimmers like Alex Capizzo, Michael Wolsek, Luka Svetko and Franz Mueller. I also think that Jia Yi Koh might be on the bubble," Peters said.

Swimming & Diving will return March 17 to March 20 to take part in the NCAA Championships at the Birmingham CrossPlex in Birmingham, Alabama. Swimmers and divers that will attend are still yet to be announced.