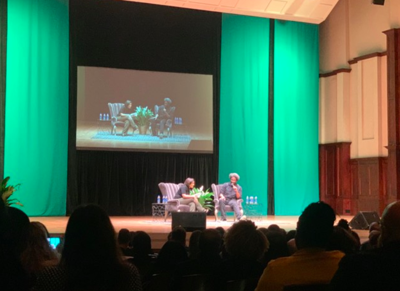 Director of Communications Matt Lockwood, said there were about 1,200 people attended the event, including students.

Lockwood said 327 people purchased tickets to the program and luncheon. He said the total was up by at least 50 tickets from last year.

“People are giving me a lot of credit for the ticket sales of the event this year but that’s not me. That’s you all coming together to celebrate and honor Dr. Martin Luther King Jr.,” Bell said.

Trina Scott, vice president of diversity and inclusion at Quicken Loans, emphasized the importance of having diverse workplaces and campuses to foster well-rounded future leaders.

“WSU does a great job preparing the next generation of future leaders by including everyone,” Scott said.

“I am really happy to see all the different voices up here all the singing and all the poetry. I hope this is the image of Detroit the nation takes forward,” Bell said.

“Normally when we talk about Detroit we talk about how it was or how it should be but this is the image of Detroit that the nation should come to know,” Bell said.

Grace Reyes is a contributing writer for The South End. She can be reached at gracereyes@wayn.edu.