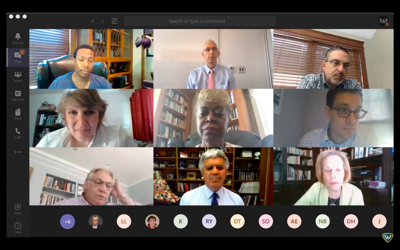 Wayne State Board of Governors voted unanimously to approve a tuition freeze for the 2021 fiscal year during its June 5 meeting held via Zoom.

President M. Roy Wilson recommended a tuition freeze out of concern for students, he said.

“These are basically very challenging economic times due to the coronavirus and we don't want to add to our student's financial burden or deter anyone from enrolling,” Wilson said. “Many students work and go to school and might have had income disrupted due to the pandemic.”

The cost of one credit hour freezes at $397 for freshman and sophomore, $471 for junior and senior and $678 for graduate general program students.

The freeze applies to most university programs, with the exception of the School of Medicine. The BOG approved a tuition increase for the SOM at the May 1 meeting.

Governor Dana Thompson’s decision to vote for the tuition freeze and against the SOM tuition increase were rooted in similar principles, she said.

“Our students are facing an unprecedented global health and economic crisis,” she said. “And our students also shouldn't have to bear the burden of increased tuition. Our medical school students should not have had to bear this increase either.”

“The general fund of the university is in better shape than the School of Medicine’s budget,” he said. “There is a difference in those two accounts and that accounts for why I at least voted for (an) increase in the medical school tuition, but I will vote for freezing the general admission.”

Charde Young, a WSU public health senior, said she supports the tuition freeze, but thinks it should’ve been extended to medical students as well. Students are facing challenges because of the COVID-19 pandemic.

“Many of those (medical) students have also gone through the same crisis and it’s unfair that they still have to figure out how they could come up with funds when we are halfway through the year, with no solution as a nation and unemployment rates increasing,” Young said.

Michigan Technological University announced a 3% tuition increase and several other universities in Michigan are pending a decision.

“I appreciate that they’re seeing what's going on and they had to step in and freeze the tuition,” Eman Alsalmi said, junior public health major. “But, I would’ve leaned toward a decrease, even a slight decrease. I liked that they at least recognized that there was an issue and they froze the tuition.”

Governor Marilyn Kelly has confidence in the BOG’s ability to make tough decisions that preserve the well-being of WSU, she said.

“I believe my colleagues here have acted responsibly in recommending the freeze and I commend them for it,” Kelly said. “I also commend President Wilson and his staff, his senior administrators, for their many long hours of work in finding a clear path to lead the university through these very troubling times.”

The next BOG meeting is scheduled for June 19.

Jenna Prestininzi is managing editor of The South End. She can be reached at managingeditortse@gmail.com.