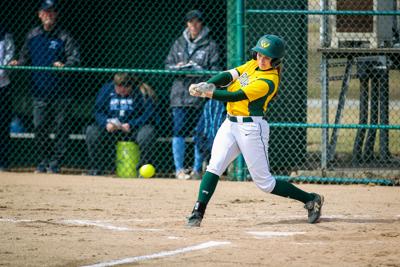 Wayne State softball entered the 2020 season with the goal of earning another postseason appearance when they opened the campaign at the Lewis University Invitational in Rosemont, Illinois.

Senior outfielder Rachelle Clayton said the team was excited to begin the season.

“It’s been a long winter indoors and I think we’re all very eager to get outside to put our skills to the test,” Clayton said. “We’re all really eager to start playing other teams and starting the season is always super fun.”

After finishing below .500 in 2018, WSU’s 34-25 record notched the team berths in the Great Lakes Intercollegiate Athletic Conference Tournament and the NCAA Division II Tournament.

“I think the seniors performed well last year,” Bryce said. “Megan Guitar and, of course, Hannah (McClounie) was an All-American. I thought that they were good leaders. They did what they had to do to give us an opportunity to move on and get into the league tournament and make the NCAA Regionals.”

WSU hopes that a blend of experience and youth will lead to success this season.

Of the five freshmen expected to see playing time this season, Bryce said pitcher/infielder Brooke Nadolny, who was the Michigan High School Softball Coaches Association’s Position Player of the Year, is poised to have the biggest impact.

“I guess you’d have to put her up there, though I think we have some good freshmen other than her,” Bryce said. “We’ve brought in a good class, they’re working hard, they have a lot of talent and they will be an integral part of our team.”

WSU was picked to finish fifth in the GLIAC’s Preseason Coaches Poll. However, Bryce said he thinks any team can win the league.

“It doesn’t matter if you’re picked first or ninth or whatever it happens to be, whoever comes to play (has) got a chance to do really well, and I think that’s true of all of the teams in the league this year,” Bryce said.

After years of being its most stable position, one of WSU’s biggest question marks this season is at pitcher.

However, Bryce said the quartet of Nadolny and sophomores Paige Ameel, Raechel Carroll and Amy Claydon are capable of producing for the team.

“All four of them have really improved and I would like to think that not too many people have four throwers,” Bryce said. “So (it) might be by committee, but they’ve all done a really nice job, so we’ll see how that sits.”

Clayton said one of the team’s goals this season is to win a conference title.

Matt Williams is sports editor of The South End. He can be reached at mattmwilliams86@gmail.com. Photo courtesy of WSU Athletics.